by Jeff Hansen
These microcarriers may offer an entirely different approach to treating solid human tumors of numerous pathologic subtypes by delivering their encapsulated drug cargo to a tumor and protecting against collateral tissue damage.

Chemists at the University of Alabama at Birmingham have designed triple-threat cancer-fighting polymer capsules that bring the promise of guided drug delivery closer to preclinical testing. 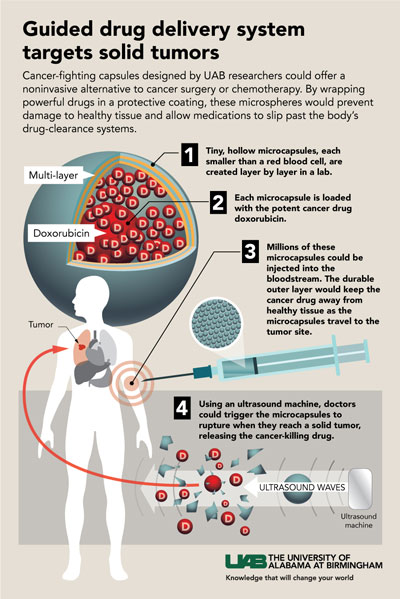 Click to enlargeThese multilayer capsules show three traits that have been difficult to achieve in a single entity. They have good imaging contrast that allows detection with low-power ultrasound, they can stably and efficiently encapsulate the cancer drug doxorubicin, and both a low- and higher-power dose of ultrasound can trigger the release of that cargo.

These three features create a guided drug delivery system to target solid tumors. Therapeutic efficacy can be further improved through surface modifications to boost targeting capabilities. Diagnostic low-power ultrasound then could visualize the nanocapsules as they concentrated in a tumor, and therapeutic higher-dose ultrasound would release the drug at ground zero, sparing the rest of the body from dose-limiting toxicity.

This precise control of when and where doxorubicin or other cancer drugs are released could offer a noninvasive alternative to cancer surgery or systemic chemotherapy, the UAB researchers report in the journal ACS Nano, which has an impact factor of 13.3.

“We envision an entirely different approach to treating solid human tumors of numerous pathologic subtypes, including common metastatic malignancies such as breast, melanoma, colon, prostate and lung, utilizing these capsules as a delivery platform,” said Eugenia Kharlampieva, Ph.D., an associate professor in the Department of Chemistry, UAB College of Arts and Sciences. “These capsules can protect encapsulated therapeutics from degradation or clearance prior to reaching the target and have ultrasound contrast as a means of visualizing the drug release. They can release their encapsulated drug cargo in specific locations via externally applied ultrasound exposure.”

Kharlampieva — who creates her novel “smart” particles while working at the intersection of polymer chemistry, nanotechnology and biomedical science — says there is an urgent, and so far unmet, need for such an easily fabricated, guided drug delivery system.

The UAB researchers, led by Kharlampieva and co-first authors Jun Chen and Sithira Ratnayaka, use alternating layers of biocompatible tannic acid and poly(N-vinylpyrrolidone), or TA/PVPON, to build their microcarriers. The layers are formed around a sacrificial core of solid silica or porous calcium carbonate that is dissolved after the layers are complete.

By varying the number of layers, the molecular weight of PVPON or the ratio of shell thickness to capsule diameter, the researchers were able to alter the physical traits of the capsules and their sensitivity to diagnostic ultrasound, at power levels below the FDA maximum for clinical imaging and diagnosis. 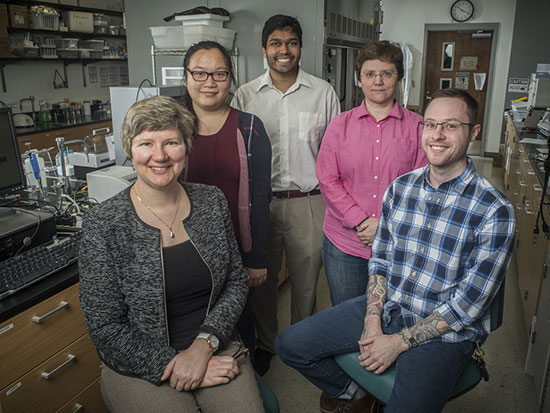 Left to right, Eugenia Kharlampieva, Jun Chen, Sithira Ratnayaka, Veronika Kozlovskaya and Aaron Alford.  To test the ultrasound imaging contrast of the microcapsules, the UAB researchers made capsules that were 5 micrometers wide, or about two times wider than the capsules used in the rupture experiments. This size is small enough to still pass through capillaries in the lung, while a larger size for various microparticles is known to greatly improve ultrasound contrast. Red blood cells, for a size comparison, have a diameter of about 6 to 8 micrometers.

Thus, Kharlampieva says, these TA/PVPON capsules have strong potential as “theranostic” agents for efficient cancer therapy in conjunction with ultrasound. The term theranostic refers to nanoparticles or microcapsules that can double as diagnostic imaging agents and as therapeutic drug-delivery carriers.

Besides Kharlampieva, Chen and Ratnayaka, co-authors of “Theranostic multilayer capsules for ultrasound imaging and guided drug delivery” are Aaron Alford, Veronika Kozlovskaya, Ph.D., Fei Liu, Bing Xue, UAB Department of Chemistry; and Kenneth Hoyt, Ph.D., Department of Bioengineering, University of Texas at Dallas. Hoyt was an associate professor in the UAB Department of Radiology when he did his work for the paper.