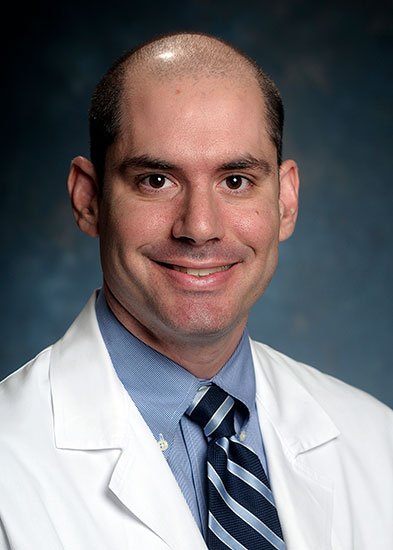 Steven Rowe, M.D.Imagine breathing through only a tiny straw. That is what life is like for people with cystic fibrosis, which includes about 30,000 people in the United States, making cystic fibrosis the most common lethal genetic disease in the country.

Though the CFTR gene responsible for the disease was discovered in 1989, it has taken researchers nearly 25 years to develop the first causative treatment for one type of cystic fibrosis. For many cystic fibrosis patients, specific treatment for their individual gene is still not available.

A step forward came in March as Vertex Pharmaceuticals announced successful Phase III trials that were conducted partly at the University of Alabama at Birmingham. Steven Rowe, M.D., a professor in the Division of Pulmonary, Allergy and Critical Care Medicine, UAB School of Medicine, was part of the international leadership team. This newly developed drug — a “corrector-potentiator” combination therapy using the Vertex drugs Tezacaftor and Ivacaftor — may lead to a better future for cystic fibrosis patients, a future in which they may not need to struggle with every breath.

According to Rowe, the new Tezacaftor/Ivacaftor combination drug is an extremely exciting development in cystic fibrosis therapy for two reasons. First, this new combination drug did not have any of the adverse pulmonary effects associated with another Vertex drug, Orkambi (Lumacaftor/Ivacaftor), aimed at treating the same group of patients. Rowe also thinks this new “corrector” combination will be better tolerated in patients in the long run because of the less frequent pulmonary side effects.

Cystic fibrosis is caused by genetic errors in the CFTR gene that, among other problems, leads to persistent lung infections. Recurring pulmonary infections result in the progressive destruction of normal lung tissue and, eventually, the need for a double lung transplant, often in young, 20- to 25-year-old individuals with cystic fibrosis.

Details of the study

In these recent Phase III trials, Vertex Pharmaceuticals examined the efficacy of this new combo drug in 24-week and eight-week studies using two patient groups: one that received the drug and one that received a placebo. In both trials, the drug-treated group showed greater lung function improvement compared to the placebo-treated group. Additionally, patients in the drug-treated group did not report more serious side effects than the placebo-treated patients.

The first, 24-week EVOLVE study assessed the combination treatment of Tezacaftor/Ivacaftor in patients with two deltaF508 mutations, and it showed a 4.0 percentage point baseline improvement of forced expiratory volume in the treatment group compared to the placebo group. The second, eight-week study, EXPAND, evaluated the treatment efficacy of the same combination drug and the monotherapy of Ivacaftor in patients with one deltaF508 mutation and one residual CFTR ion channel function mutation. This shorter study showed a 6.8 percentage point improvement in the Tezacaftor/Ivacaftor combination therapy group and a 4.7 percentage point improvement in the Ivacaftor monotherapy group compared to the placebo-treated group.

While a 4.7 percentage point improvement might not sound like much, Rowe emphasized that EVOLVE study patients with the residual function mutations showed this significant lung function improvement even after the relatively short, eight-week treatment. He believes the Tezacaftor/Ivacaftor combination will also be a great candidate for the next generation of cystic fibrosis drugs, mostly because this combination showed mild pulmonary side effects similar to the placebo’s side effects in these trials.

Additionally, these trials are important since the EVOLVE study was the first Phase III clinical trial that involved cystic fibrosis patients with residual function mutations. This means the new drug could be available to another important population of CF patients.

The exact mechanism of how Tezacaftor works is not known yet. Patient recruitment for new clinical trials investigating the mechanisms of action of Tezacaftor is underway, and a handful of cystic fibrosis patients have already been enrolled in these studies at UAB.

The study was funded by Vertex Pharmaceuticals and supported by infrastructure awards by the National Institutes of Health and the Cystic Fibrosis Foundation. The foundation helped develop cystic fibrosis drugs with Vertex through a collaborative agreement.