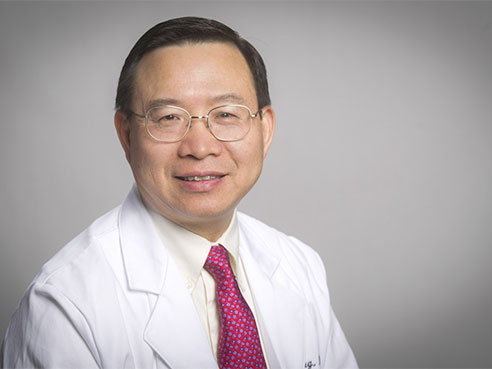 In a city of 1 million, about 10 to 15 patients a year will come to the emergency department with indistinct complaints that hide a potentially fatal blood disease.

“They usually come in the middle of the night, and the symptoms can be very nonspecific,” said X. Long Zheng, M.D., Ph.D., professor and division director of Laboratory Medicine in the Department of Pathology, University of Alabama at Birmingham School of Medicine. “Headache, blurred vision, malaise and abdominal pain. If misdiagnosed, they can die in one to two days.”

This syndrome — acquired thrombotic thrombocytopenic purpura, or TTP — produces blood clots in small arterioles throughout the body, particularly in the brain, heart, pancreas and kidneys. The most effective treatment thus far is daily plasma exchange, with replacement of all or one and a half times the body’s entire blood volume. Such treatment costs nearly $10,000 a day and may need to be continued for weeks or, in some patients, months.

Zheng and colleagues have now developed a potential novel way to treat acquired TTP. Their approach not only could slash the amount of plasma transfusion needed for TTP patients, but also could become a new emergency therapy for strokes, heart attacks, malignant malaria and pre-eclampsia. All are associated with relative deficiency of plasma ADAMTS13 activity. The work, now a proof-of-concept in a mouse TTP model, has been published online this week in the journal Blood.

TTP is an autoimmune disorder — people produce an autoantibody that inactivates an enzyme called ADAMTS13. Of note, Zheng was the first scientist to clone ADAMTS13. That enzyme normally acts to cleave von Willebrand factor, a large protein involved in blood clotting. The loss of ADAMTS13 activity due to autoantibody in TTP patients allows formation of the destructive microvascular clots in many important organ tissues.

Zheng had an idea of how treat TTP: “Hide the enzyme inside cells where the antibody can’t see it.”

His cells of choice were platelets, tiny blood cells a fifth the diameter of a red blood cell.

The normal function of a platelet is to stop bleeding from blood vessels. “When the platelet sticks to the injured site, it gets activated, changes its shape and releases its contents,” said Zheng. “It’s like a mini-bomb.”

Zheng reasoned that, if he could fill the platelets with ADAMTS13, the platelets would then carry the enzyme right to the place it was most needed to dissolve the TTP clots.


The group then showed that:

All of these findings of the study, they conclude, “suggest that platelets may be ideal carriers for antithrombic ADAMTS13, allowing its release at high concentrations at the site of thrombus formation without being inactivated by the potential circulating anti-ADAMTS13 inhibitors.”

Of course, genetic engineering or biochemical approaches would not be used to apply this proof-of-concept to human TTP patients. Zheng says one approach will be to learn how to pack ADAMTS13 inside the human platelets during the time that bags of donated blood sit at room temperature for three days as they are tested for multiple infectious disease markers. These packed platelets would then be tested to learn how many ADAMTS13-loaded platelets need to be transfused to get anti-blood clot and anti-TTP effects in patients with acquired TTP. Platelets do not have nuclei, and they lack the blood type ABO antigen markers found on red blood cells.

The co-authors of the paper, “Platelet-delivered ADAMTS13 inhibits arterial thrombosis and prevents murine models of thrombotic thrombocytopenic purpura,” include Drs. Brandy Pickens, Yingying Mao, Dengju Li, Don Siegel and Douglas Cines from the departments of Pathology and Laboratory Medicine, University of Pennsylvania; and Dr. Mortimer Poncz from the Division of Hematology, Children’s Hospital of Philadelphia.

Zheng has recently joined faculty at the University of Alabama at Birmingham. He has been an NIH-sponsored investigator of TTP since 2003.