Study points to possible new treatment for HER2+ breast cancer 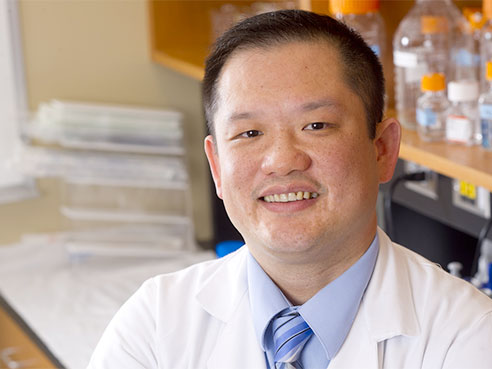 There are five subtypes of breast cancer, and they are distinct diseases with vastly different biologies that drastically alter their progression and responses to treatment. Understanding those differences is the starting point to a more effective, personalized treatment of breast cancer, which strikes more than 230,000 women in the U.S. each year.

A paper by University of Alabama at Birmingham cancer researcher Eddy S. Yang, M.D., Ph.D., and colleagues has found that a significant portion of one of the subtypes — called HER2-enriched or HER2+ — has elevated expression of two proteins called PARP1 and phospho-p65. This basic biology finding paves the way for a future human clinical trial to see if drugs called PARP inhibitors can better treat women who develop HER2+ breast cancer, a cancer with a fairly poor prognosis.

These PARP inhibitors have already generated excitement in clinical studies as possible therapies for a different subtype of cancer in which the DNA repair pathway in cells is defective due to a BRCA1 or BRCA2 mutation, says Yang, an associate professor in the Department of Radiation Oncology and a scientist the UAB Comprehensive Cancer Center.

In 2012, UAB cancer researchers extended the potential application of these drugs when they discovered that HER2+ cancer cells were susceptible to PARP inhibitors, even though they have intact DNA repair pathways.

In the current research, published online in the journal Breast Cancer Research and Treatment, the UAB group tested breast cancer tissue from 307 patients who had either HER2+, basal or luminal breast cancer. They found that HER2+ tumors had higher levels of PARP1 and phospho-p65 compared to HER2– tumors. They also found that PARP1 and phospho-p65 are coordinately expressed.

These high PARP1 levels may explain the 2012 finding of sensitivity of HER2+ cells to PARP inhibitors. High phospho-p65 is a marker for increased activity of NF-kB signaling, which appears to correlate with tumor aggressiveness.

“Whether elevated PARP1 and phospho-p65 levels can serve as a potential marker of PARP inhibitor sensitivity should be tested in future clinical trials,” the authors concluded.

In the paper, the researchers obtained preliminary evidence through a cBioPortal analysis of the PAM50-defined subtype patient gene sets from The Cancer Genome Atlas, an NIH research program to characterize the genomic underpinnings of dozens of cancers. They then extended that preliminary finding by studying 307 breast cancer tissue samples that came from cancer patients diagnosed at UAB between 1999 and 2012, and from the Minority Biospecimen/Biobanking Geographic Management Program, Region 3 consortium, which is part of a systematic NIH effort to further collaboration among cancer health disparities researchers.

Several PARP inhibitors from different companies are in clinical trials, Yang says. One PARP inhibitor called olaparib or Lynparza is FDA-approved for advanced ovarian cancer patients who have a BRCA mutation and have failed several lines of chemotherapy.