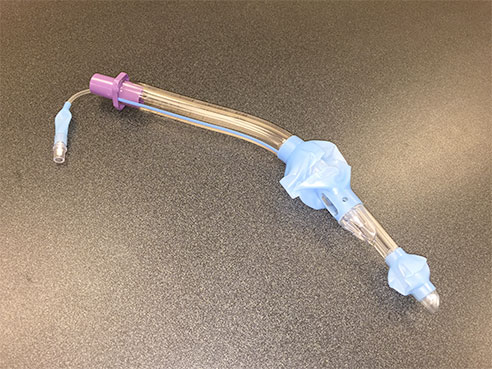 UAB researchers are studying two breathing tubes that EMS crews use to treat cardiac arrest patients, including this one, the King laryngeal tube.Investigators at the University of Alabama at Birmingham want to determine whether a newer, easier-to-use breathing tube will produce better results than existing endotracheal tubes in cases of out-of-hospital cardiac arrest. UAB’s Alabama Resuscitation Center is spearheading a national trial involving paramedics in five U.S. metropolitan areas.

“Out-of-hospital cardiac arrest is a major public health problem in this country with some 300,000 cases per year,” said Henry Wang, M.D., professor and vice chair for Research in the UAB Department of Emergency Medicine. “Only about 10 percent survive, and airway management during cardiac arrest is an extremely important aspect of treatment.”

Wang is the national principal investigator for the Pragmatic Airway Resuscitation Trial — or PART — which will examine the older endotracheal tube’s performance against the newer King laryngeal tube to see whether either produces higher 72-hour survival rates in adults with cardiac arrest treated by EMS responders.

Paramedics often care for patients with cardiac arrest by inserting a plastic endotracheal tube into the lungs to assist with breathing. The King LT is a newer device that is easier to insert than the endotracheal tube.

“While both are commonly used by paramedics, we do not have a consensus as to which is a better choice for use in adult cardiac arrest,” Wang said. “The endotracheal tube can be difficult and time-consuming to insert properly. The King LT is just one of several newer airway devices that show great promise but need to be studied.”

PART will be conducted in Birmingham, Dallas, Milwaukee, Pittsburgh and Portland. Locally, the Bessemer Fire Department is the first EMS agency in the country to take part.

Adult cardiac arrest patients will randomly receive the standard ET tube or the newer King LT airway device. Because this study will be conducted on people who have suffered cardiac arrest and are unconscious, the UAB Institutional Review Board has granted permission for the study to be conducted under exception from informed consent for emergency research. For questions about the trial, or to opt out, please contact the PART study team at (205) 934-9532 or alabamaroc@uabmc.edu.

PART is supported by a grant from the National Heart, Lung and Blood Institute. The study is a project of the Resuscitation Outcomes Consortium, a group of United States and Canadian research institutions. UAB’s Alabama Resuscitation Center is led by Wang, along with Jeff Kerby, M.D., Ph.D., director of the Division of Trauma, Burns and Surgical Critical Care, and Jean-François Pittet, Ph.D., professor in the Department of Anesthesiology.