by Shannon Thomason
Nearly 1,400 students will graduate this summer, including 90 who will receive the university’s highest degrees. An estimated 850 will walk in the commencement ceremony. 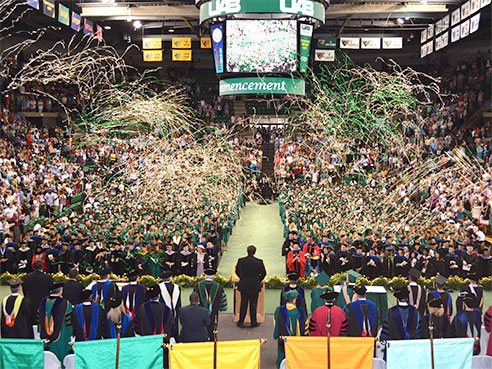 Nearly 1,400 students will graduate from the University of Alabama at Birmingham this summer, and an estimated 850 are expected to walk in the commencement ceremony set for 9:30 a.m. Saturday, Aug. 12, at Bartow Arena. The event will be live-streamed on UAB’s Facebook page at www.facebook.com/uab.edu.

The UAB Graduate School’s hooding ceremony is set for noon at UAB’s Alys Stephens Performing Arts Center. The ceremony is for students earning doctorates in education, philosophy, public health, nursing practice and science. For summer 2017, the university’s highest degrees will be conferred on 90 students from 17 states and eight countries in 27 disciplines; approximately 65 will participate in the ceremony. The keynote speaker will be Patricia A. Patrician, Ph.D., the Donna Brown Banton Endowed Professor in the UAB School of Nursing. Patrician will also bear the academic mace for the ceremony.

A to-do list for graduates, as well as information for guests, is available on the commencement website. Tickets are not required; but seating is first come, first served. Bartow Arena doors will open at 8:30 a.m. University officials recommend guests leave nonessential bags at home or in the car. The ceremonies will be recorded and added online for viewing at www.uab.edu/commencement about a week after the ceremonies.

The mace carrier for the ceremony will be Heith Copes, Ph.D., professor in the College of Arts and Sciences’ Department of Criminal Justice. Copes is the 2017 winner of the Caroline P. and Charles W. Ireland Prize for Scholarly Distinction.

Copes’ work focuses on individuals who engage in both crime and drug use. Specifically, his research centers on criminal decision-making and narrative sense-making. He is a leader in the field of narrative criminology, which captures and explores the stories of criminals to understand their motivations for committing their crimes, as well as how they got into crime, their methods of committing the crime and the strategies they use to reduce their risk. In addition, his research examines the ways that offenders excuse and justify their crimes and how they construct social identities. 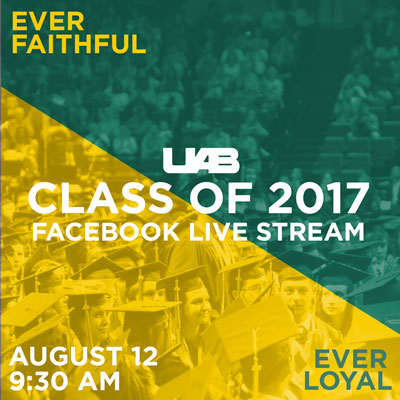 The undergraduate speaker for the ceremony is Amanda J. Boren. She is graduating with a Bachelor of Science degree in human resource management from the Collat School of Business. She has been a UAB Facilities human resources intern since January and a compliance and human resources intern for Southern Co./Alabama Power. She has also worked as a facility specialist and customer service representative at the UAB Campus Recreation Center.

After graduation, Boren plans to continue her career in human resources and continue her education by pursuing a Master of Business Administration degree.

The graduate commencement speaker for the ceremony is Brandy Lackey. She is graduating with her Master of Science degree in nursing as a family nurse practitioner and was a Graduate Nursing Education Primary Care Scholar. She is president-elect of the Nursing Graduate Student Association. For her MSN cohorts, she has used Facebook to create a peer support network to build healthy relationships between students, cultivate leadership skills and demonstrate how to help one another be successful in the program. Her goal was to help each student who wanted to be successful succeed, and not feel isolated in an online program with a few on-campus intensives.

In 2001, she received her Bachelor of Science degree in nursing from the University of Alabama in Tuscaloosa. Upon graduating, she was a registered nurse in the United States Air Force at several bases, including Offutt Air Force Base in Nebraska, Al-Udeid Air Base in Qatar, and Elgin Air Force Base and Hurlburt Field in Florida. Lackey has been a family nurse practitioner student-intern serving Physical Express at its Millbrook and Deatsville locations, as well as Wybenga Family Health Center in Prattville.

After graduation, Lackey will continue to study to pass her national certification boards. After a short break, she plans to return to UAB to earn her doctorate in nursing practice and teach at the UAB School of Nursing as an adjunct, while continuing to work in the family practice setting.