Getting back in the race after in-marathon femur fracture

Her leg broke at mile 16 of a marathon. Thanks to UAB Orthopaedics, she was racing again in seven months.
Written by: Emma Shepard
Media contact: Bob Shepard 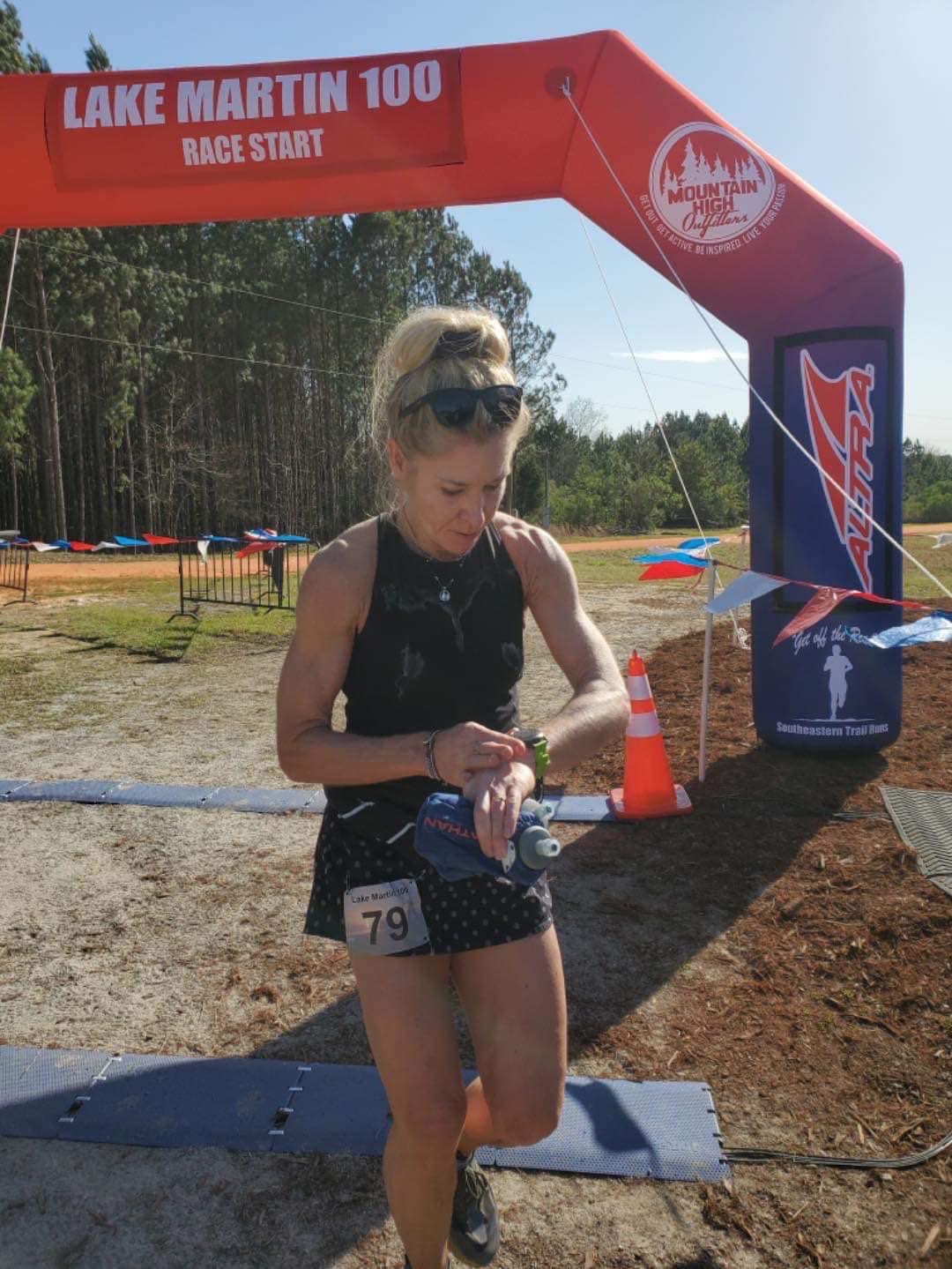 While training for the Mercedes Marathon, Arrington unknowingly developed a stress fracture.On Feb. 17, 2020, the starting gun fired for the start of the 19th running of the Mercedes Marathon in Birmingham. Veteran ultra-runner Donna Arrington, age 55, was in the field. She was on pace to finish strong until, at the halfway point at mile 13, Arrington began to feel sharp pain in her right leg.

She continued on, although her pain was intensifying.

“Discomfort during running is normal, expected and tolerated by most all runners,” said Arrington, a nurse in perioperative services for more than 30 years at UAB Medicine. “Pain during running might be tolerated by runners, but it can be a sign of real injury.”

Three miles later, in continuing pain, Arrington’s right femur snapped in half. She collapsed on the ground, pulled out her phone and called 911.

Birmingham Fire and Rescue arrived on the scene moments later. When asked where she would like to be taken by ambulance, she — with no hesitation — said the Emergency Department at the University of Alabama at Birmingham.

“I’ve been running for years. It holds me together; it’s my thing,” said Arrington, a highly successful ultra-marathoner. “I am somewhat competitive, not just with other runners but also with myself. Each time I enter a race, I train for the specific course and set goals to perform at my very best. A competitive nature can be a double-edged sword; it keeps me training but my brain still thinks my body is in its early 40s.” 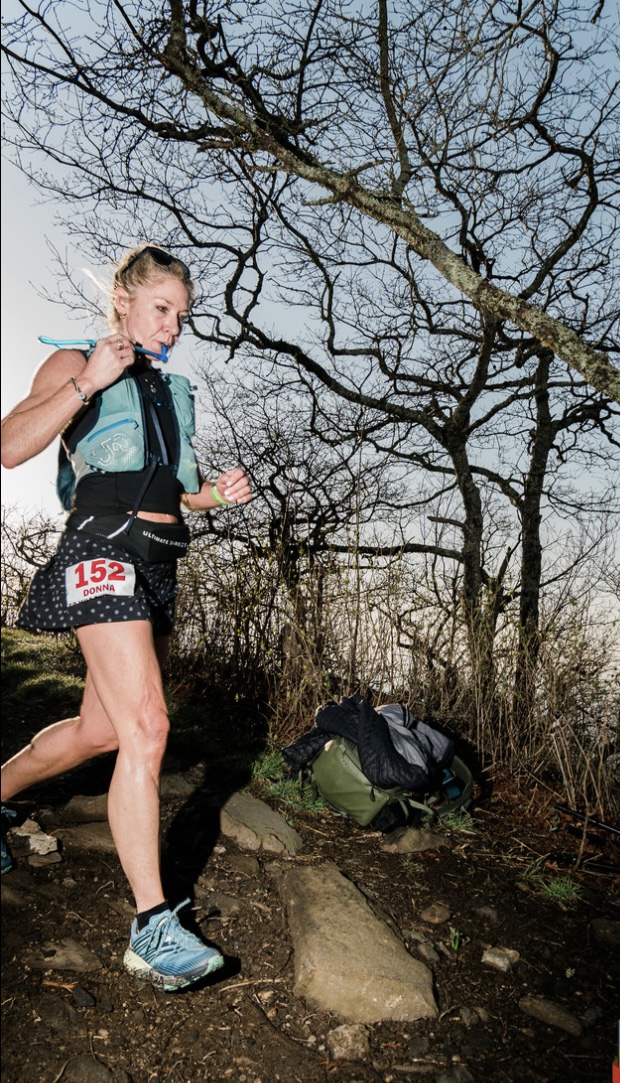 Arrington is a veteran ultra-runner, often competing in 100 mile endurance events.Prior to this injury, most of Arrington’s running was on mountain single-track trails. She had run thousands of trail miles with very few injuries, completing numerous 50K races across the Southeast, as well as six 100-mile endurance runs from Virginia to Oregon.

After a 100-mile, 35-hour finish in Idaho, Arrington needed a break from the dirt, so she decided to reconnect with her road-running past, which ultimately led her to register for the Mercedes Marathon in downtown Birmingham.

During her high-mileage training for the race, she thought she might have developed a common runner’s injury, IT band syndrome. Instead, the pain she was experiencing was a stress fracture, which finally snapped during the marathon.

Wheeled into the trauma bay

Once Arrington arrived at UAB Hospital, Jonathan Quade, M.D., associate professor in the UAB Marnix E. Heersink School of Medicine Department of Orthopaedic Surgery and section chief of trauma, worked with the emergency department to treat Arrington. Quade was confident from the beginning that they could get Arrington back to doing what she loved.

“I knew that our multidisciplinary team could work together to repair Donna’s injury and get her focused on a successful recovery,” Quade said. “Knowing her drive and dedication to her running, it was just as important to our team that she was able to get back to what she loved, competing on the same level that she was previously, or even better.”

Quade did note that it might take as long as a year before Arrington was back to full distance running.

“Dr. Quade’s estimate was spot-on for my healing,” Arrington said. “There were no unrealistic expectations or trying to talk me out of running in the future, which is so important to rebuild confidence. So many runners who experience even minor injuries are treated by some medical professionals as if they’re deserving of injury because of the high physical demands of ultra-running. Dr. Quade gave me hope.” 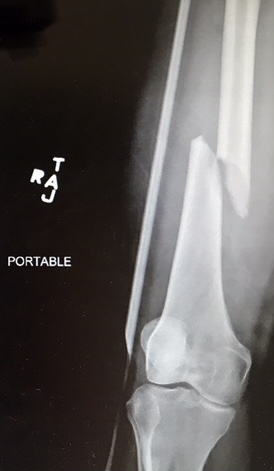 X-rays clearly show the complete break of Arrington's right femur.Following surgery, Arrington remembers being amazed at how little the incisions were, expecting instead a large incision from her hip to her knee. She had no cast, just bandages over her five small incisions. The day after surgery, with assistance of a walker, Arrington walked two laps around the nurse’s desk and then packed up and went home.

“It can be traumatic — experiencing a fracture in a split-second during running, but we wanted to give Donna the confidence to get back out there and compete,” Quade said. “She is such a leader in the running community, and it was an honor that she trusted us with her care.”

Lacing up the running shoes again

Fast forward seven months after her femur fracture, and Arrington had entered and run the Grayson Highlands 50K trail race in Virginia, with an OK from Quade and the care team. She ran slower than usual through a tough course, but finished strong.

“I had two screws in my lower femur at the base of the rod in my leg that constantly reminded me of my injury. Dr. Quade had warned me earlier those two screws might give me trouble, and he would remove them after about 12 months,” Arrington said.

Arrington continued running, working to build herself back to the 90 percent recovery that Quade said would be possible. Eventually, Quade referred her to Amit Momaya, M.D., associate professor and chief of Sports Medicine in the UAB Sports Medicine Clinic, who would treat her nagging tendinopathy and remove the screws at the same time.

“Dr. Momaya is an exceptional practitioner. He listened to me and responded to me in a way that made me feel validated and heard. I was the most important patient at that moment,” Arrington said.

Recovered. And back on the trail. 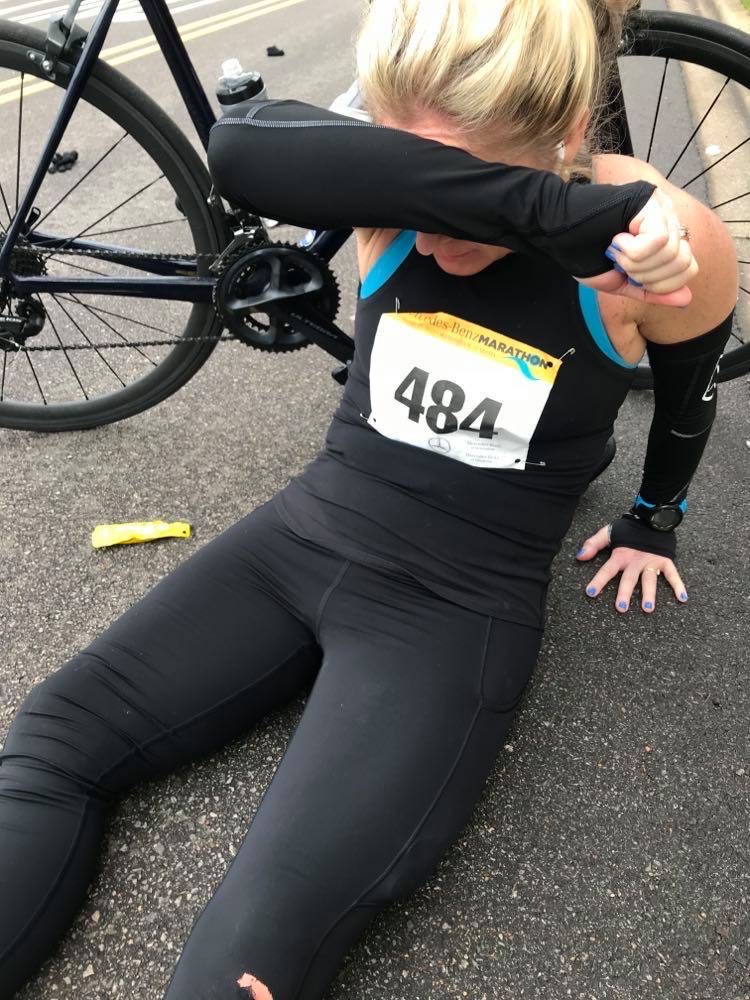 Arrington was at mile 16 of the 26 mile marathon when her leg broke.With the tendinopathy treated and the screws removed, Arrington has run several trail races, traveling to North Georgia’s Chattahoochee National Forest to compete in a 50-mile endurance trail race. She placed third for females and beat her previous years’ race time by three hours.

“Drs. Quade and Momaya assured me that I would return to running and gave me the hope and confidence to continue training,” Arrington said. “There were times when I wasn’t sure I’d be able to continue; it was so painful and so difficult to regain my strength and endurance. But having the support of my UAB medical team and my friends and family inspired me to keep training.”

Arrington also traveled to Oregon to run the Mountain Lakes 100-mile trail race in the Mount Hood National Forest in Oregon. She placed seventh overall for females with a finish time of 25 hours and 19 minutes. This was her second-best 100-mile finish time ever.

“I am in better physical and mental shape today than when I started running ultramarathons in 2014,” she said. “Facing fear and the adversity of catastrophic injury helped me grow body, soul and spirit. I appreciate all the things I took for granted, like my health. I’ve come out of this a stronger runner and better person.”