by Bob Shepard
Four UAB faculty members are named to endowed chair or professorship positions by the Board of Trustees. 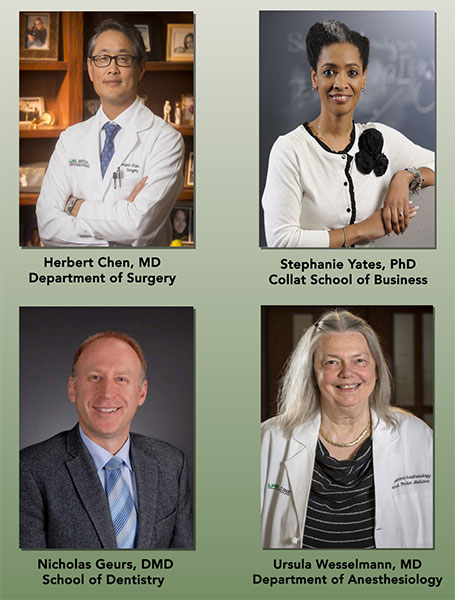 Chen joined UAB as chair of surgery in 2015 from the University of Wisconsin. A graduate of Stanford University, he earned his medical degree from Duke University School of Medicine and conducted residency and fellowship training at Johns Hopkins Hospital.

Wesselmann was appointed a professor of anesthesiology at UAB in 2008.She earned her medical degree and Ph.D. equivalent from the Christian-Albrechts-Universitat zu Kiel in West Germany and a diploma in tropical medicine and hygiene from the London School of Tropical Medicine and Hygiene in London. She did postgraduate training at the Medical College of Wisconsin, University of Chicago, Johns Hopkins Hospital, Massachusetts General Hospital and Harvard Medical School.

Wesselmann has an international reputation as an outstanding clinician-scientist in gynecological and urological chronic pain treatment. Her research focus is to determine the biological, psychological and socio-cultural variables contributing to pain and pain-related disability in women treated for breast cancer, and racial and ethnic health disparities in cancer survivorship.

She has served as a member of the editorial boards of the journals Clinical Journal of Pain, Current Pain and Headache Reports, Encyclopedia of Pain, European Journal of Pain, Journal of Back and Musculoskeletal Rehabilitation, Pain, and The Pain Medicine Journal Club Journal. She has served as a committee member and/or external adviser for a broad array of national and international institutions, including the NIH, the U.S. Food and Drug Administration, the U.S. Department of Veteran Affairs and the Institute of Medicine of the National Academies.

Geurs’ research is nationally and internationally well-known in the areas of periodontology and dental implantology with funded research from various corporate sponsors, the National Institutes of Health, and the National Institute of Dental and Craniofacial Research. He has contributed to over 130 publications and abstracts in professional journals; and he won the Best Article Published in The International Journal of Oral and Maxillofacial Implants.

Yates came to UAB in 2007 following appointments at Rensselaer Polytechnic Institute, Siena College and Fulbright Specialist Program at the University of Cape Town. She is a graduate of the University of Cincinnati and earned her doctorate from Louisiana State University. In 2015, she was named director of the Regions Institute for Financial Education.

She is a member of numerous professional organizations and advisory boards, including the American Real Estate Society, the Financial Management Association, Financial Education Outreach, TruFund Financial Services and Alabama Saves. She was recently awarded the 2016 President’s Award for Diversity, an annual award given to outstanding faculty, staff and students for their achievements toward a more inclusive, diverse and competent university community whereby the criteria include significance, implementation and impact of community service.