by Bob Shepard
Research to identify a new approach to treat Alzheimer’s disease gets new funding after a pilot grant from the Alabama Drug Discovery Alliance. 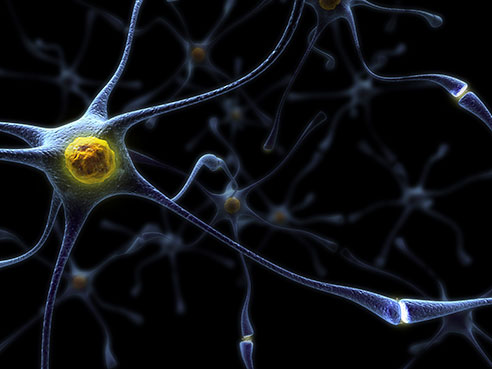 Researchers at the University of Alabama at Birmingham and Southern Research are launching a new study to identify a novel therapy for treating Alzheimer’s disease. Funded by a grant of $250,000 from the BrightFocus Foundation, the new study grew from preliminary work funded by the Alabama Drug Discovery Alliance.

Principal investigator Erik Roberson, M.D., Ph.D., associate professor in the Department of Neurology and co-director of the Center for Neurodegeneration and Experimental Therapeutics at UAB, and co-principal investigator Corinne E. Augelli-Szafran, Ph.D., director of the chemistry department at Southern Research, will lead this program focusing on targeting the interaction between tau and fyn, two proteins in the brain that are involved with Alzheimer’s disease.

“We’ve long known that the protein tau is associated with Alzheimer’s disease,” said Roberson. “Fyn is a protein involved in learning and memory, and has more recently been implicated in neurological conditions such as Alzheimer’s and epilepsy. There are now considerable data suggesting that blocking the interaction between tau and fyn could be protective against Alzheimer’s.”

Roberson says previous research has shown that lowering tau in the brain in animal models seems to prevent Alzheimer’s disease, and the tau/fyn linkage is an intriguing target for blocking tau’s function without having to reduce tau levels, which may be difficult in human patients.

“The interaction seems to be key,” Roberson said. “But we can test this only by finding drugs that block that interaction. The BrightFocus Foundation grant, following on the heels of our ADDA funding, will fund the next step in this process.”

The UAB School of Medicine and Southern Research began the Alabama Drug Discovery Alliance in 2008, with crucial contributions from the UAB Center for Clinical and Translational Science and the UAB Comprehensive Cancer Center. The ADDA’s objective is to use the resources available at these institutions to facilitate drug discovery and development.

“This is an excellent example of taking groundbreaking basic research to the next level, and it demonstrates the unique capabilities within the ADDA,” said Mark J. Suto, Ph.D., vice president of drug discovery at Southern Research.

The first phase of this work, funded by the ADDA, used the state-of-the-art high-throughput screening facility at Southern Research to look for compounds that acted upon the interaction of tau and fyn. More than 100,000 compounds were screened, from which about 30 compounds showed a positive response. The new grant from BrightFocus will allow the research team to further evaluate the active compounds with the goal of identifying the top two or three candidates for a potential drug that could interfere with the tau/fyn connection.

Those candidates will then be tested in animal models of Alzheimer’s disease with the ultimate goal of entering into human clinical trials for the treatment for the disease.

“This is an exciting and novel therapeutic approach for the treatment of Alzheimer’s disease,” Augelli-Szafran said. “Having been able to identify potential chemical matter from our high-throughput facility at Southern Research gives us an edge moving forward with this research program. With our drug discovery talent here at Southern Research and our research and clinical expertise at UAB, we anticipate that this program will have an impact on the Alzheimer’s disease community.”

The researchers will employ the BrightFocus Foundation grant to help support the necessary work to find the strongest contenders for a new potential drug candidate — work that got its start with the ADDA.

“This grant illustrates how we are leveraging institutional investments by both UAB and Southern Research to attract outside investment in our programs,” said Maaike Everts, Ph.D., director of the ADDA and an associate professor in the Department of Pediatrics. “I think the funding of this proposal illustrates the quality of the science and the approach we have here in the Alabama Drug Discovery Alliance, and how the strengths of both institutions complement each other, making for a very attractive partnership for external investment.”