by Bob Shepard
A drug derived from female hormones that may help soldiers survive major blood loss on a battlefield will undergo first human testing at UAB. 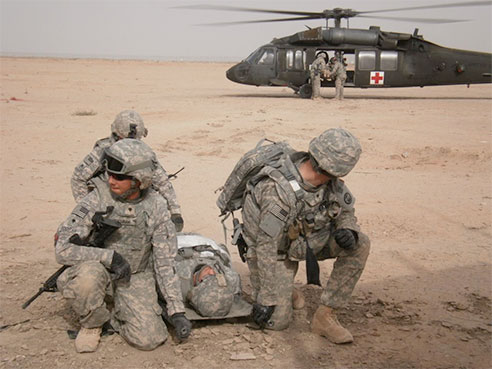 The University of Alabama at Birmingham will launch the first Phase 1 human trials of a drug — derived from the female hormone estrogen — that may help patients with severe bleeding survive long enough to get to appropriate medical care. A three year, $10 million U.S. Department of Defense contract from the Combat Casualty Care Research Program, U.S. Army Medical Research and Materiel Command, Fort Detrick MD, will fund studies of a synthetic estrogen molecule that may have a profound effect on an individual’s ability to survive major blood loss.

The initial observations and subsequent research in animal models was done by Irshad H. Chaudry, Ph.D., professor in the Department of Surgery at UAB and co-principal investigator on the contract. Chaudry and his colleagues discovered that following severe bleeding, a single injection increased survival times even in the absence of any fluid resuscitation. Time is the key. Severely hemorrhaging patients — those who experience approximately 40 percent or more blood loss — who do not receive fluid or blood product resuscitation within a few hours usually do not survive.

“The work of Dr. Chaudry and colleagues showed that EE-3-SO4 is extremely effective in improving cardiovascular functions and boosting survival rates following injuries with extreme hemorrhage,” said principal investigator Mansoor Saleh, M.D., professor in the Division of Hematology/Oncology, Department of Medicine, and director of the UAB Phase 1 Clinical Trials Program. “This drug could have major implications for treating trauma, from battlefield injuries to life threatening hemorrhage following any injury. We are excited to be launching the first-in-human studies of this drug that was developed by one of our own here at UAB. This is a classic example of bench-to-bedside translational research.”

Click to enlarge According to the Department of Defense, more than 80 percent of potentially survivable U.S. battlefield deaths from 2001-2011 were due to severe blood loss. Saleh said the drug does not stop a patient from bleeding, but appears to help the body respond to extreme blood loss by mobilizing a variety of physiologic mechanisms.

“Part of our challenge is to identify how EE-3-SO4 works its magic,” Saleh said. “We envision a single dose, injectable medication — administered in the field — which would buy time for a patient to be transported to a medical facility or advanced medical care. The key is to maintain blood flow to the brain and other important organs even while a patient is hemorrhaging.”

The drug appears to work in three ways:

The DOD contract will enable UAB to begin the first human studies of EE-3-SO4. The initial studies, or Phase 1 studies, will test the safety and tolerability of the drug in healthy humans who are not experiencing blood loss. Researchers will also use these studies to determine optimal dosing information and study the mechanism of action of this novel agent.

Secondary objectives will include determining the pharmacokinetics of the drug — to see if its effect on the heart, blood vessels and blood volume mimics that seen in non-human studies.

“There are certain relevant clinical and biologic surrogate markers that we look for, as well as predefined cardiac and vascular parameters that should give a good indication of how the drug behaves in humans,” said Saleh.

A second set of trials will involve administering the drug to healthy subjects who have had 1-2 units of blood removed in a controlled setting. Investigators will again be looking for physiological responses that indicate whether the drug is having the intended effect on the heart and blood vessels.

While EE-3-SO4 is promising, Saleh urges patience, as testing will be a lengthy process with no guarantee that it will prove beneficial for humans. If it does meet its potential, the drug could dramatically change how trauma care is delivered. 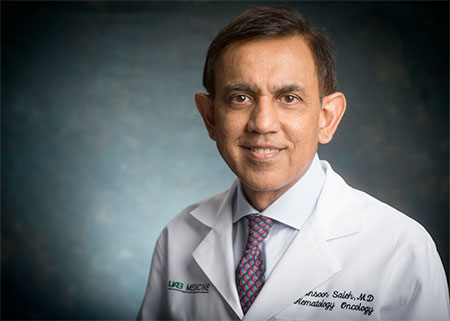 “A drug such as this would have tremendous utility,” said Jeffrey Kerby, M.D., director of the UAB Division of Trauma, Burns and Surgical Critical Care and a former U.S. Air Force trauma surgeon. “Not only is there a need for drugs that could save lives on a battlefield, a drug of this nature would be an important tool in the hands of emergency medical providers responding to traumatic injuries of any kind.”

Saleh is the director of the newly established UAB Phase 1 Clinical Trials Program which provides infrastructure and support for early phase, first-in-human clinical trials of potential new drugs. The program enhances the university’s ability to conduct such studies through a patient-centered approach where a dedicated team is responsible for the entire operation of the study of such novel agents.

“The program forms the epicenter of a competitive clinical and translational drug development program at UAB and will provide all of the necessary resources to conduct Phase 1 trials that investigators need,” Saleh said.

To learn more about the 19-year effort by Chaudry and colleagues to develop EE-3-SO4, click here for more information on the science that led to this discovery.