by Jeff Hansen
Measure of Mpl gene expression reveals a heterogonous population of leukemia stem cells: one group leukemic and the other group non-leukemic. 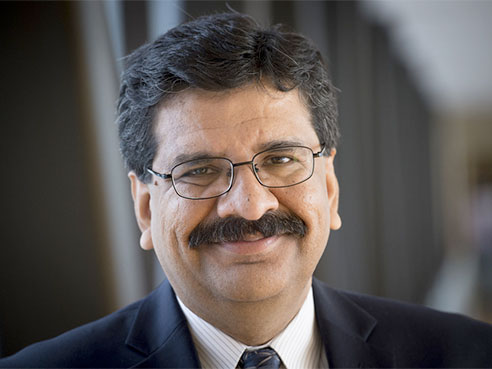 University of Alabama at Birmingham researchers have found a marker on blood cells that may help the most pressing problem in chronic myelogenous leukemia, or CML, today — an inability to get patients off treatment.

“To do that, we have to be able to maintain their remission after stopping treatment,” said Ravi Bhatia, M.D., division director of hematology and oncology in the UAB Department of Medicine, and deputy director of the UAB Comprehensive Cancer Center. “Treatment using drugs called tyrosine kinase inhibitors, or TKIs, do not eliminate leukemia-initiating cells.”

In most patients, residual leukemia-initiating cells result in regeneration of leukemia, necessitating lifelong treatment with these drugs. Only a small proportion of CML patients stay in remission after stopping TKI treatment. Two keys to containing remission may be the ability to identify those patients who will be able to successfully stop their TKI, without later relapse and, second, the ability to identify patients who may benefit from an additional drug regimen besides TKI to achieve treatment-free remission.

Research by Bhatia and colleagues, published Feb. 15 in The Journal of Clinical Investigation, shows that the leukemia-initiating stem cells in the bone marrow are not uniform. Instead, evidence points to a mixed, or heterogonous, population of cells that can be distinguished by several cell markers, significantly Mpl gene expression. Cells with high Mpl gene expression are prone to initiating the disease-causing profusion of white blood cells when tested in a mouse model of chronic myelogenous leukemia, or CML.

The low Mpl gene expression group engrafts in the bone marrow without producing disease. Thus, among the long-term hematopoietic stem cells (LTHSC) found in CML, the Mpl marker distinguishes a group that appears to be leukemic and a group that appears to be non-leukemic. Similar cell-marker differences were seen for LTHSC studied from human CML patients. These findings imply that, among CML LTHSC, it is the leukemic LTHSC that will cause disease relapse if TKI therapy is stopped.

“This shows that not all leukemia stem cells are equal,” Bhatia said. “Some are more prone to causing leukemia and relapses, while some others may just hang around without potential for contributing to relapse.”

Over the past 15 years, chronic myelogenous leukemia has had a marked improvement in five-year survival, from about 30 percent to nearly 90 percent today. This improvement comes from TKI drugs. However, the drugs have to be taken every day for a patient’s lifetime, and their yearly cost can be $100,000 to $150,000. This is a societal burden, and for some patients the drug co-payments can exceed their ability to pay. Identifying patients who could safely stop TKI treatment would be a boon.

In their experiments, the Bhatia team used an inducible transgenic mouse model of CML, where the BCR-ABL gene fusion of CML is under the control of a tetracycline-regulated enhancer. This model creates a chronic myeloproliferative disorder that resembles chronic phase CML. Previous work had shown that only the cells with an LTHSC phenotype were capable of long-term repopulation and leukemia-initiating capacity after transplantation to another mouse.

When the researchers transplanted LTHSC from CML-model mice to other mice, 11 of 20 recipients developed CML, and nine of 20 showed engraftment with CML cells but did not develop leukocytosis characteristic of leukemia. When the LTHSC from the primary-recipient mice were transferred to secondary recipients, seven of 17 mice receiving cells from leukemic mice developed CML, and none of the secondary-recipient mice receiving cells from the non-leukemic mice developed CML.

These two groups of LTHSC were then tested for differences in gene expression. Significant differences were seen between the leukemic and non-leukemic LTHSC for the genes Mpl, c-Myc, CD47, Pten, Sirt1, Ptch1 and Tie2.

Bhatia’s group focused on the Mpl marker. They used flow cytometry to select bone marrow LTHSC with either high or low Mpl expression from CML-model BCR-ABL mice. Seven of 16 mice receiving MplHi LTHSC developed leukemia after transplantation, compared with one of 17 receiving MplLo LTHSC. This showed an increased leukemogenic capacity for the MplHi LTHSC.

The researchers also investigated the impact of cell cycle status. They found that CML MplHi LTHSC that were in a resting stage of the cell cycle had enhanced long-term engraftment and leukemogenic capacity compared with cycling MplHi LTHSC.

The researchers used virus vectors and shRNA to create Mpl knockdown BCR-ABL LTHSC and showed that the knockdown cells had a greatly reduced ability to develop leukemia in recipient mice. The Mpl knockdown cells, after stimulation by the Mpl ligand thrombopoietin, also had reduced expression of the activated transcription factors p-STAT3 and p-STAT5, compared with controls.

Altogether, the researchers write, “These results identify MPL expression as a marker as well as a key regulator of leukemogenic potential and drug sensitivity of CML LTHSC… Our findings support further investigation of approaches to antagonize MPL signaling as a potential therapeutic strategy to eliminate leukemia-initiating LTHSC.”