Mitophagy in macrophages is a key step toward pulmonary fibrosis 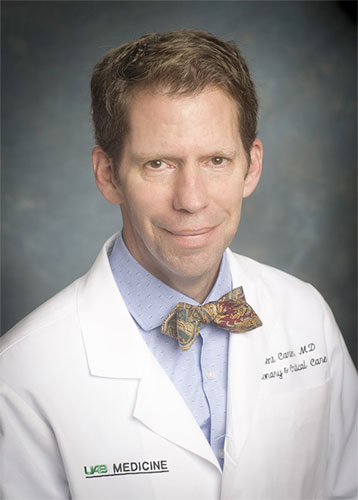 Idiopathic pulmonary fibrosis is a devastating disease, and recently approved therapies have limited efficacy. Lungs become damaged with fibrotic scarring, and the median length of survival after diagnosis is three to five years.

The lung immune cells called alveolar macrophages are known to play a role in disease progression by starting an immune response and producing the reactive oxygen species that somehow lead to increased amounts of transforming growth factor beta, or TGF-β1. Macrophages are large white blood cells that are the initial defense-fighting cells in the lung.

In a paper published Feb. 23 in the journal Immunity, University of Alabama at Birmingham researchers show that the pathway leading to increased expression of TGF-β1 — which provokes the destructive lung remodeling — involves Akt1 kinase-induction of reactive oxygen species and mitophagy. They also show that alveolar macrophages are the primary source of the damage-inducing TGF-β1 in the lung. Understanding such basic molecular mechanisms in the development and progression of pulmonary fibrosis may reveal ways to treat this disorder.

Mitophagy is a normal cell-protecting biological process in which mitochondria — the organelles that are the powerhouses of the cell —are selectively degraded if they are dysfunctional or damaged. Components from the degraded mitochondria are recycled to create new, functional mitochondria in the cell. Normally, mitophagy is a beneficial process. But the evidence from A. Brent Carter, M.D., professor in the Division of Pulmonary, Allergy and Critical Care Medicine, UAB Department of Medicine, and his colleagues shows that mitophagy plays a pathological role in alveolar macrophages to produce pulmonary fibrosis in a mouse model of pulmonary fibrosis.

“The biggest surprise,” Carter said, “was something that intuitively makes no sense: We show that mitophagy is required for TGF-β1 production.”

Third, while Akt1 expression increases TGF-β1 expression, if the researchers inhibited mitophagy in vitro — using a mitochondria-targeted antioxidant or mRNA silencing of Parkin2, one of the proteins necessary for mitophagy — this abrogated TGF-β1 expression and fibroblast differentiation, despite elevated Akt1 expression. In vivo, mouse alveolar macrophages that had a conditional Park2 mutation, the gene for Parkin2, had abrogated production of TGF-β1 in bronchoalveolar lavage fluid.

Altogether, these data suggest that Akt1-mediated mitophagy contributes to alveolar macrophage apoptosis resistance and pro-fibrotic polarization, and that autophagy in alveolar macrophages is required for pulmonary fibrosis development.