The memory play, a masterpiece of Irish dramatic literature set in rural Ireland in 1936, was picked for its five complex and strong female character roles for Theatre UAB students. 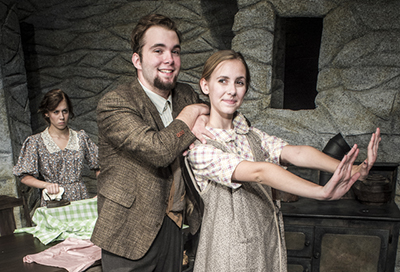 Merideth Busby of Fairhope as Chris, Chance Novalis of Madison as Gerry and Meredith Morse of Westerville, Ohio, as Agnes star in the play.A memory play and masterpiece of Irish dramatic literature, “Dancing at Lughnasa,” will open Theatre UAB’s new 2015-16 season of main stage plays.

Theatre UAB is the performance company of the University of Alabama at Birmingham College of Arts and Sciences’ Department of Theatre.

The Festival of Lughnasa heralds the harvest season of 1936 as the five unmarried Mundy sisters eke out a modest living in rural Donegal, Ireland. A newly acquired radio links them to the music, hope and romance of the outside world. That summer, the household revolves around the 7-year-old love child, Michael, and the return of the Mundy brother, Jack, who has served 25 years as a missionary in Uganda. When Michael’s father, a Welsh drifter, visits the little cottage, events are set in motion that crack the foundation of the family forever. Widely regarded as a masterpiece, Friel’s haunting memory play is a tribute to the spirit and valor of the past.

The play is a bittersweet mixture of joy and sadness. There is conflict between religious conviction and secular customs. The sisters search for romantic love, in a town where men are scarce and often away from home in search of work or battling in wars. The play was picked for its five complex and strong female character roles for Theatre UAB students, says Cannon.

“It is a memory play — meaning that while the play focuses on two late afternoons in the summer of 1936, Michael narrates the past and future lives of his mother and aunts, giving the audience insight into the full and often tragic lives of the characters,” Cannon said. 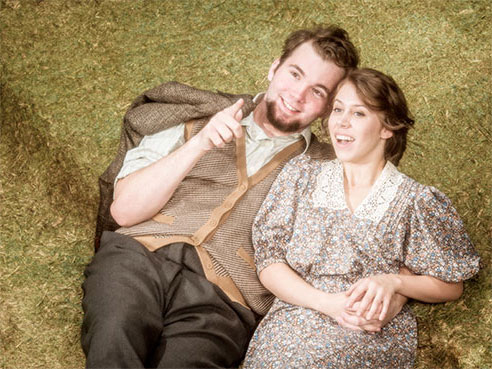 Merideth Busby of Fairhope as Chris and Chance Novalis of Madison as Gerry in a scene from “Dancing at Lughnasa”Michael views the play by recalling the memories of his family when he was a child. As a young and innocent boy, Michael focuses on the joy, jubilation and celebration of his family’s life. It is only when Michael stops the action of the play that he tells us both the hardships of the family’s past and the even darker, tragic nature of the family’s future. Michael’s fondest memories are of his aunts’ spontaneously breaking out in an Irish step dance or the popular music of the time, Cole Porter. While Michael is painfully aware of the bleak future of his family, his remembrances are of the joy, celebrations and love shared with his mother and aunts, Cannon says.

The elaborate scenic design, by Ed Zuckerman, features the kitchen of the Mundy household nestled in the rolling hillsides of Northern Ireland. Choreography, by jazz instructor Elizabeth Ross, features an energetic Irish step dance as well as swing dancing to Cole Porter’s “Anything Goes” and “Night and Day.”

“Rich in Irish language and dialect, ‘Dancing at Lughnasa’ is a play that will not only make you laugh and cry but leave you with the yearning desire to dance life’s troubles away,” Cannon said.

The student cast is Brian Wittenberg of Johns Creek, Georgia, as Michael; Merideth Busby of Fairhope as Chris; Chance Novalis of Madison as Gerry; Marissa Hebson of Pinson as Kate; Maddie Burrell of Warrior as Maggie; Meredith Morse of Westerville, Ohio, as Agnes; Holly Morgan of Madison as Rose; and Diego Faulkner of Birmingham as Father Jack.