by Shannon Thomason
This fast-paced, tuneful 45-minute comedy for all ages features a cast of music and theater students, an alumni artist and a guest artist with chamber orchestra. 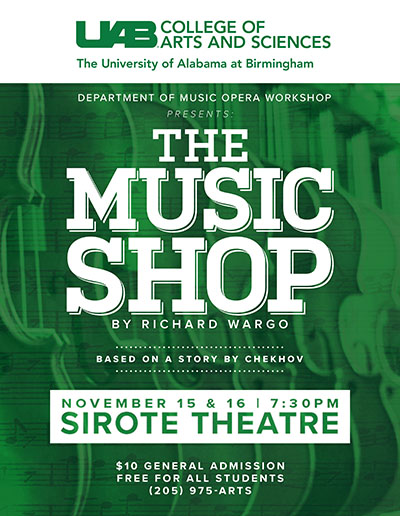 See Richard Wargo’s charming one-act opera “The Music Shop,” based on the short story “Forgot” by Anton Chekhov, with two performances Nov. 15-16 at the University of Alabama at Birmingham.

The performances are presented by the College of Arts and Sciences’ Department of Music. Patrick Evans directs a cast of UAB music and theater students, an alumni artist and a guest artist with chamber orchestra in this opera, which is suitable for all ages. It is a fast-paced, humorous, tuneful 45-minute comedy.

Masha, who works in the music shop for gruff owner Dmitri, longs for better pay and a life outside the shop. Dmitri has just received a large collection of masterworks, and Ivan, a customer, comes in to purchase a special popular song that his wife has been commissioned to sing at the wedding of the prince the very next day. If only he could remember the title of the song.

“The Music Shop is a delightful, comic piece which is a wonderful introduction to the world of opera for the novice, and also contains many clever musical quotes from famous operas and fun jokes for seasoned opera goers,” Evans said.

Along with the two public performances, two daytime performances will be performed for middle and high school students, through a partnership with the Department of Music and the Alys Stephens Center.