Bevill Neuroscience Symposium honors the past, builds the future

The University of Alabama at Birmingham’s third annual Bevill Neuroscience Symposium to be held Oct. 4, 2011, will draw scientists nationwide to exchange the latest research, newest theories and the most critical thinking on cognition and cognitive disorders. 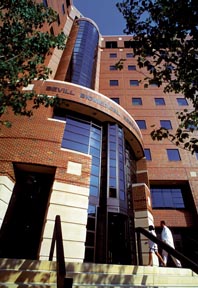 The symposium also honors a man who fostered an environment in Alabama in which science and medicine could take root and grow into an enterprise that today provides jobs, economic development and world-class medical care to all Alabamians.

Tom Bevill spent 38 years in government service. He was a 15-term U.S. congressman from Alabama’s 4th Congressional District and served in the Alabama Legislature for eight years. Through it all, he was an ardent supporter of medical and scientific research.

“My father recognized that advances in medicine would have an effect on each and every one of us in the state,” said Patricia Warren, Bevill’s daughter. “As a congressman, he was able to secure funding through the Appalachian Regional Commission and the Tennessee Valley Authority to build health clinics in small towns throughout the district. He also was able to promote funding for nursing buildings at Gadsden State and at Walker College (now Bevill State), and other health-technology job-training programs at many community colleges. And he embraced the critical role UAB played in the advancement of the medical community and the image of Alabama as a whole.”

Bevill grew up in the small coal-mining community of Townley, Ala., in the 1920s and 1930s, living in the back of his father’s country store. Warren says the store, with its pot-bellied stove, was the anchor of the community.

“That store was like a living newspaper,” she recalls. “Everyone went there to share their stories of victories and losses, to fight, to debate, to celebrate — the store was a slice of humanity. I believe this background gave him a deeply ingrained sense of people.  He stayed very close to his constituents. He understood them, understood their needs and had a keen sense of their character.”

One example was Bevill’s support of nuclear medicine at UAB.  As a member of the U.S. House Appropriations Committee, Bevill was instrumental in helping UAB acquire its first magnetic resonance imaging machine by providing the necessary funding to build the building that would house the equipment.

Bevill understood the need to plan for the future — a future not yet recognized, perhaps not yet even glimpsed.

“My dad used to tell people about how the Bevill Biomedical Research Building at UAB was built with several empty floors that were intended for future growth,” said Warren. “This illustrates his thinking that UAB was an important key to building our future. He understood we had to have the infrastructure to adapt to new technologies that were not a reality today but would be tomorrow.”

Bevill worked tirelessly to bring new ideas and new technologies to Alabama. The Bevill Neuroscience Symposium carries that work to the next level.

“One of the goals of the UAB Bevill Neuroscience Symposium is to bring the best and brightest minds in neuroscience to Birmingham,” said David Standaert, M.D., Ph.D., chair of the Department of Neurology and director of the Comprehensive Neuroscience Center. “The symposium enables UAB to showcase the width and breadth of the exciting science under way here at UAB, which can lead to collaborations and affiliations with leading researchers from around the world.”

Speakers at the symposium include renowned investigators from the Mt. Sinai School of Medicine, Harvard University, the University of California, San Francisco, Massachusetts Institute of Technology and the University of Pennsylvania, along with prominent UAB researchers.

The symposium to be held Oct. 4 in Children’s Harbor Building at Sixth Avenue and 16th Street, is sponsored by the Bevill family, UAB Comprehensive Neuroscience Center and Cognition and Cognitive Disorders Initiative.

Bevill’s family is proud to continue the association with UAB that the congressman fostered during his years of service to Alabama.

“UAB has touched everyone in the state one way or another, by providing outstanding health care, top-notch education for future physicians and research that defines the future health care will be able to offer,” said Warren. “Actually, UAB has benefited everyone in the country. That's a pretty powerful legacy.”