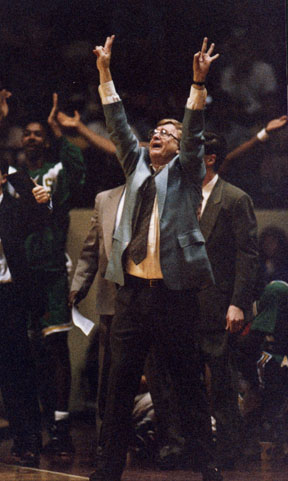 B. Gene Bartow, visionary and founding director of the University of Alabama at Birmingham intercollegiate athletic program and one of the winningest NCAA Division I basketball coaches, died Tuesday, Jan. 3, 2012. He was 81.

UAB Athletics began in 1977 with the hiring of Bartow as athletic director and men’s basketball coach. He oversaw an unprecedented era of athletic accomplishment during the next 22 years, including the expansion of UAB athletics as it grew to 17 intercollegiate teams competing at the nation’s highest level.

“To begin an athletic program from the ground up, UAB had to find a motivating force without parallel,” said UAB President Carol Garrison. “Gene Bartow certainly was that person. He was a pioneer and a passionate believer and leader in UAB athletics. Anyone who was fortunate enough to know Coach Bartow was enriched.

“His enduring legacy will be providing fantastic sports memories to UAB fans and ensuring opportunities for physical and academic achievement for thousands of young people. He will be greatly missed.”

UAB basketball was a success almost instantly upon Bartow’s arrival, exploding onto the national scene with a trip to the NCAA Elite Eight in the program’s fourth season. The Blazers became a basketball powerhouse in the 1980s, reaching the NCAA Tournament in seven consecutive years and producing three All-Americans in the first eight years.

UAB experienced some of its greatest athletic achievements under Bartow; the 1993-94 season is still considered one of the best in the history of Blazer athletics. UAB teams won six Great Midwest Conference championships, including the Commissioner’s Cup, which was awarded to the university with the most successful overall athletics program.

As director of athletics, his impact at UAB was equally significant. Bartow was a major force behind UAB’s move from the Sun Belt Conference (1978-91) to the Great Midwest Conference (1991-95) and eventually to Conference USA in 1995. Bartow’s dream of seeing UAB compete in all phases of college athletics became a reality when the Blazers began a football program in 1989, and he directed the program to its eventual NCAA Division I-A status and membership in Conference USA.

“Coach Bartow is a beloved figure in college basketball and in the lives of many players and fans,” said UAB Athletics Director Brian Mackin. “He was a great man and dedicated leader who set a standard of excellence for UAB athletics.”

Bartow retired as UAB’s head basketball coach March 26, 1996, with a 366-203 record in 18 seasons. He led the Blazers to the NIT in the program’s second year of existence, and followed that with seven straight NCAA tournament appearances, including trips to the Sweet 16 in 1981 and the Elite Eight in 1982. In all, he led UAB to 14 post-season appearances, 10 of which were NCAA tournaments.

UAB renamed its basketball arena in Bartow’s honor in 1997. A cast bronze sculpture of Bartow was unveiled on the concourse at the main entrance to Bartow Arena in 2001 and still casts a watchful eye over the building that bears his name.

Bartow retired as director of UAB athletics in 2000, and he was named director emeritus during a ceremony attended by former players, friends and family, including his wife Ruth. When Bartow stepped down, he had built and led a fully rounded athletic program with a history of major wins and successes.

“There is never a good time for something like this,” Bartow said at his retirement. “But we came to UAB to give our students and the people of Birmingham a quality, competitive Division I athletic program they could call their own, and I think we have done that.

“The buildings and the records will stay as part of this great university and this great community and will continue to grow. Ruth and I will carry with us and cherish always the memories of more than two decades at UAB. That includes the friends we have made, the wonderful players and coaches we been associated with and some of the best administrators in the world who invited us here in the beginning, stood with us over the years and continue to make this program possible.”

Before joining UAB Bartow had established himself as one of the premier coaches in college basketball; he led his 1973 Memphis State and 1976 UCLA teams to the NCAA Final Four. He coached teams at six universities during a 34-year span that included 12 NCAA tournament appearances and two Final Four appearances. He was named NABC National Coach of The Year in 1973 and has since been inducted into the Alabama Sports Hall of Fame, the Missouri Basketball Hall of Fame and halls of fame at Central Missouri State University and Valparaiso University.

As National Coach of the Year in 1973, Bartow guided Memphis State to the National Championship game against UCLA. He succeeded John Wooden at UCLA in 1975 and took the Bruins to the 1976 Final Four. He left UCLA for UAB after the 1976-77 season in a move that stunned the world of collegiate athletics.

UAB was less than 10 years old and had no varsity athletic program when Bartow arrived. Twenty-three years after his retirement, a program started with a handful of student-athletes and employees and a big dream was a thriving enterprise that included more than 400 athletes competing in 17 sports (six men’s, 11 women’s) and had an annual operating budget exceeding $10 million.

With 647 career wins and 12 NCAA Tournament appearances, Bartow ranks in the top 20 on the list of all-time winningest NCAA Division I basketball coaches.

Bartow and his wife, the former Ruth Huffine, have three children, Mark, Beth and Murry, who is the head men’s basketball coach at East Tennessee State.

Bartow’s impact off the court also has been tremendous. He opened the door for donors to UAB athletics to also support cancer research at the UAB Comprehensive Cancer Center in 2009 by establishing the Gene Bartow Fund for Cancer Research.

The UAB Comprehensive Cancer Center and UAB Men's Basketball are teaming up again on Saturday, Jan. 7, 2012, for the third Bartow Classic fundraiser.

The game, sponsored by UAB Medicine, against Memphis will tip off at 8 p.m.