by Shannon Thomason
Support the UAB Gospel Choir with the purchase of a new DVD/CD set, from which funds raised will go towards a new tour and a new recording this fall. 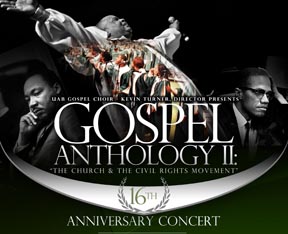 To raise much-needed funds for future tours and live recordings, the UAB Gospel Choir will sell a Civil Rights Collector’s Edition CD/DVD set of its live theatrical concert, “Gospel Anthology II: The Church and the Civil Rights Movement.” The set is available for purchase until Sept 15, 2012; all orders will be shipped Sept. 19.

The set is $20, plus a $3 shipping fee. Money raised through the sales will help with costs associated with the choir’s 17th anniversary concert and live recording, set to take place Monday, Nov. 19, in UAB’s Alys Stephens Center. The fundraiser also may help the choir go on tour to the U.S. Virgin Islands in May 2013. Plans are in the making for a third and final installment in the UAB Gospel Choir Anthology series, “Gospel Anthology III: Evolution.”

“Gospel Anthology II: The Church and the Civil Rights Movement” pays homage to an era of freedom and protest songs sung at marches throughout the Southeast and the nation. The concert DVD features inspirational songs that later became musical standards in the pursuit of civil and human rights. Selections range from “Freedom Highway” by the Staple Singers to “A Change Is Gonna Come” by Sam Cooke. The theatrical concert event honored the music and heroes of the Civil Rights era both locally and nationally, including reverends Joseph Lowery, Abraham Woods and Martin Luther King Jr., says UAB Gospel Choir Director Kevin Turner. Jazz from Ensley’s Tuxedo Junction, storytellers, Negro spirituals, ballads and music sung during the Memphis Poor People’s March and in Birmingham are part of the concert DVD. The CD includes the song “You Don’t Know What I Could Have Been,” in memory of the four young girls killed in the 1963 bombing of Sixteenth Street Baptist Church.

To order the special DVD/CD set, send a check or money order payable to UAB Gospel Choir and address it to UAB Gospel Choir Fundraiser, HC 117, 1720 Second Ave. South, Birmingham, AL 35294-1260. The set soon will be available for purchase on the UAB Department of Music’s online e-store; visit www.uab.edu/music or call Turner at 205-934-6155.