by Jim Bakken
UAB cites its accredited police department and investments in safety resources, as well as initiatives in shared responsibility and community partnerships, as reasons data shows crime is much lower than perceived — and lower than many urban and non-urban universities. 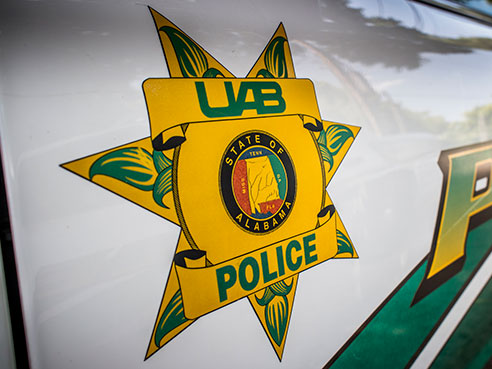 A review of safety data suggests the University of Alabama at Birmingham performs as well as or better in safety statistics compared to similar urban institutions, as well as many traditional, non-urban college campuses across the region and beyond.

However, a study conducted by the School of Public Health demonstrated that the perception of crime on campus considerably outweighs actual crime. A 2012 comparison showed UAB with the lowest violent crime of similar urban universities in the region.

UAB President Ray L. Watts says a safe environment is a shared responsibility, and the campus community can take personal pride in the results.

“Our students, faculty, staff, patients and guests inform our many initiatives and stay active in promoting safety by taking advantage of a growing wealth of resources, and the results to-date are positive,” Watts said. “However, until our campus is completely crime-free, there is work to do, and we will continue our aggressive efforts to work with our constituents and maintain a safe environment.”

In 2014, Watts initiated a review of the institution’s on-campus threat preparedness that would enlist students, faculty, staff and outside experts. The UAB Safety Task Force developed a robust action plan following a comprehensive survey of facilities, safety support services and education programs, as well as institutional practices and procedures intended to create and sustain a safe environment. UAB continues to implement and build on safety initiatives outlined in the final report of the task force.

UAB Police Chief Anthony Purcell says that, while reported crime at UAB is relatively low, continued vigilance is vitally important. “We need to remember that, whoever and wherever we are, no one is immune to criminal activity, and many crimes can be prevented with planning and awareness,” he said. “Our campus strives to continuously enhance safety through analysis, training and communication, as well as the latest technology.”

Purcell suggests one way crime could be greatly reduced is to attack the most common crime.

“Because the vast majority of crime on college campuses is theft of property like small personal items, we remind students, faculty and staff that larceny is often a crime of opportunity,” Purcell said. “Eliminate those opportunities by securing belongings; don’t leave them unattended in public, lock the door when you leave your residence hall room even if you’re just down the hall, and don’t leave valuables in vehicles.”

Since it was launched in summer 2015, students and employees have been using the free RAVE Guardian app that connects the user to friends and family who can serve as a virtual safety escort. It also serves as a panic button connected directly to UABPD, and allows users to send tips or safety concerns directly to UAB Police and include photographs.

UAB provides many resources to empower the UAB community to take an active role in safety, and UAB Emergency Management Executive Director Randy Pewitt hopes students, faculty and staff will continue to learn about what UAB and UAB Police are doing, as well as what they themselves can do.

“Awareness is vital to maintaining a safe campus, and we encourage the UAB community to share our responsibility for safety by taking full advantage of available resources,” Pewitt said. “Read the task force report, download and use the free RAVE Guardian safety app, call for on-campus safety escorts and use Blazer Express, take advantage of UABPD education and safety programs, and update your B-Alert emergency notification profile.”

B-Alert notifications are mass emergency notifications sent by text, email and voice to alert the UAB community of an actionable event. B-Alerts are used for weather warnings, school closings and crime alerts, and are intended to be limited to incidents involving an immediate threat or those that require an action on the part of the recipient.

UAB has made a concerted effort to increase the speed and accuracy of these messages, and has expanded the use of B-Alerts to include off-campus incidents that may pose an active threat.

“This form of communication is important because a better-informed campus community is a safer one,” Purcell said. “In the relatively short time we’ve employed B-Alert, it has progressively become a more useful and informative tool.”

As B-Alert’s use has expanded, so too have misperceptions about campus security, says Purcell.

“When our community receives a B-Alert, it is alarming, and we want it to be,” Purcell said. “It makes the recipients more aware of their surroundings, and that is good; but it can also promote a false sense regarding the amount of crime on campus.”

A city within a city, UAB now covers 105 city blocks and has more than 18,000 students and 23,000 employees. The UAB Health System, which includes the third-largest public hospital in the nation, sees more than a million patient visits a year, and visitors to campus during special events can exceed many tens of thousands. Relative to the institution’s size and operation, the number of B-Alerts — particularly those for incidents on campus — are relatively low, says Purcell.

“Our highest priority is the safety of our students, faculty, staff, patients and guests,” Purcell said. “Our accredited police department trains regularly and works closely with the UAB and Birmingham communities to stay at the forefront of law enforcement excellence in a diverse environment of higher education, health care, and arts and entertainment, and we encourage the UAB community to utilize the many available safety resources like Blazer Express, police escorts and RAVE Guardian.”