by Shannon Thomason
More than 1,500 students will graduate this fall, including 83 who will receive the university’s highest degrees. An estimated 700 will walk in the commencement ceremony. 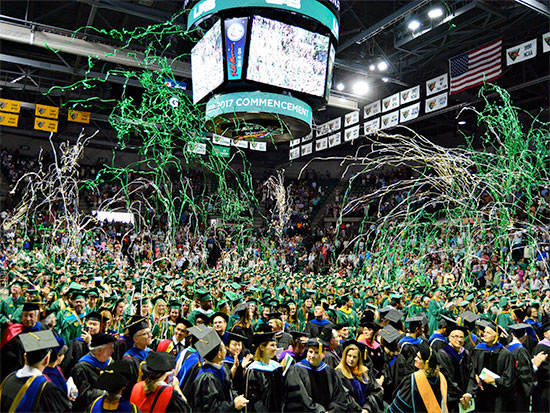 More than 1,500 students will graduate from the University of Alabama at Birmingham this fall, and an estimated 700 are expected to walk in the commencement ceremony set for 9:30 a.m. Saturday, Dec. 16, at Bartow Arena. The ceremony will be live-streamed on the UAB Facebook page.

The UAB Graduate School’s hooding ceremony is set for noon at UAB’s Alys Stephens Performing Arts Center. The ceremony is for students earning doctorates in education, philosophy, public health, nursing practice and science. For fall 2017, the university’s highest degrees will be conferred on 83 students from 21 states and five countries in 35 disciplines; approximately 70 will participate in the ceremony. The keynote speaker will be Gary Cutter, Ph.D., a professor in the UAB School of Public Health’s Department of Biostatistics. Cutter will also bear the academic mace for the ceremony. The School of Health Professions and the School of Public Health will each hold ceremonies on Friday, Dec. 15.

A to-do list for graduates, as well as information for guests, is available on the commencement website. Tickets are not required; but seating for the commencement ceremony is first come, first served. Bartow Arena doors will open at 8:30 a.m. University officials recommend guests leave nonessential bags at home or in the car. The ceremonies will be recorded and added online for viewing at www.uab.edu/commencement about a week after the ceremonies.

The mace carrier for the fall 2017 commencement will be Robert M. Centor, M.D., professor in the Division of General Internal Medicine in the School of Medicine’s Department of Medicine. Centor has received many awards for teaching from UAB medical students, including the Argus award for best overall attending physician, the Best Campus Attending Award and Best Overall Teacher for the Department of Medicine. He is the recipient of the highest universitywide awards, including the UAB Presidential Award for Excellence in Teaching and The Ellen Gregg Ingalls/UAB National Alumni Society Award for Lifetime Achievement in Teaching. Centor this year was honored with the Robert J. Glaser Award from the Society for General Internal Medicine. The Glaser award recognizes outstanding contributions to research, education, leadership and mentoring in medicine.

The undergraduate student speaker for the ceremony will be Blaire Landry, who is graduating from the College of Arts and Sciences with a Bachelor of Science degree in criminal justice with a concentration in forensic science, and a minor in accounting from Collat School of Business.

While a student at UAB, she served as an intern with the Department of Justice. She assisted with evidence review, briefings and open source intelligence pertaining to several violent and cybercrime cases. She participated in crisis negotiations, social media investigations and car stops training.

Since August 2015, Landry has been a student assistant in the UAB Computer Forensics Lab, where she developed a research paper analyzing credit card crimes on social media through statistics and open source intelligence. She also investigated active cases for government agencies. She investigated and analyzed subjects in bank hacking cases using open source intelligence, and provided 300 criminal social media profiles weekly to a private intelligence organization.

Landry has been a member of the UAB Honors College, UAB Alpha Lambda Delta Honors Society, UAB Order of Omega Honors Society and UAB Beta Alpha Psi Honors Society. She also served this past year as president for Delta Gamma sorority. Other UAB experience included participation in the UAB Undergraduate Student Government Association as its attorney general and as senator for the College of Arts and Sciences. She also was a student assistant in the UAB Writing Center. After graduation, Landry plans to work with the Department of Justice serving the people of the United States."