by Tyler Greer
Fifty-first transplant means 102 total surgeries have been performed since December 2013 as the nation’s longest-ever chain continues to grow.


The longest living-donor kidney transplant chain to take place at one institution — or anywhere on record — reached a new milestone Aug. 6-7 with transplant Nos. 49-51 taking place in UAB Hospital. The latest transplants mean 102 total surgeries have been performed since December 2013, with 51 nephrectomies and 51 transplants completed, giving people in dire need of a working kidney a new chance at life.

UAB’s kidney chain was started Dec. 5, 2013, by the generosity of altruistic donor Paula Kok. The Pelham, Alabama, resident approached UAB about the possibility of donating a kidney to someone in need and was committed to donating despite not having an intended recipient. Her gift began a chain of transplants that involves people from 11 states — Alabama, Florida, Georgia, Illinois, Louisiana, Mississippi, New Jersey, North Carolina, Tennessee, Texas, and Virginia. 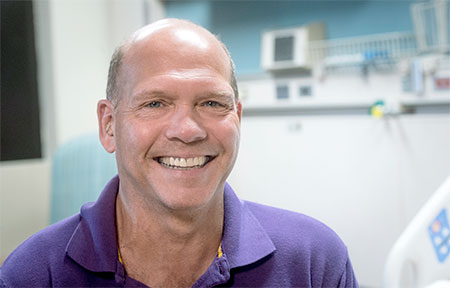 Jerry PhillipsNorth Carolinian is No. 50

One of the latest of those is Jerry Phillips, a Goldsboro, North Carolina, native who was 7 years old when he first discovered blood in his urine, a frightening discovery for anyone, let alone a child.

But it wasn’t until 31 years later — years after feeling run-down and experiencing swelling in his extremities, hearing loss, high blood pressure and other issues — that doctors were able to diagnose Phillips with Alport syndrome, a genetic disorder that affects the tiny tufts of capillaries in the kidneys that filter waste from the blood. The condition, which the National Institutes of Health estimates affects approximately one in 50,000 newborns, is known to cause hearing and eye problems, along with other health issues, including kidney failure.

Phillips had known since 2001 that he would eventually need a kidney transplant to have a chance to survive. And on Thursday, Aug. 6, the 52-year-old received the gift of a new kidney at UAB Hospital — the 50th transplant recipient as part of the UAB Kidney Chain, which began in December 2013.

“When you get that Alport’s diagnosis, they tell you it always leads to kidney failure,” Phillips said. “All you can do then is just do a lot of reading about kidney failure and try to prepare. You want to stay healthy for your family and not let the disease define who you are and instead carry on and do the best with your life as you have it. Now, to have an opportunity to be part of this kidney chain and have a chance at a healthy life is just an amazing thing. What a great thing for a person to do, to decide to be a living donor! To know how that can benefit people who need kidneys, and to know that someone wanted to walk in and give a kidney two years ago to start this — it’s overwhelming.”

Phillips received his kidney from Janaka West, a State Line, Mississippi, native who was donor No. 50. West was donating on behalf of her mom, Janet Henderson, who was recipient No. 49.

These three latest transplants were able to take place due in part to the generosity of UAB student Don Heatherly of Calera, Alabama. Heatherly is the ninth altruistic donor to be part of the chain, meaning he approached UAB’s Comprehensive Transplant Institute to volunteer to donate a kidney to someone in need.

“Part of what has enabled us to perform 51 transplants as part of this chain is that we’ve had other altruistic, nondirected donors like Don come forward,” said Jayme Locke, M.D., surgical director of the Incompatible Kidney Transplant Program in  UAB’s School of Medicine and coordinator of the chain.

“Many who have come forward want to participate in the chain; others want to start their own or just help anyone in need. We’ve had compatible pairs like Jerry and his donor Joy Dean, who elected to receive from and give to a stranger instead of a direct donation so they could help others in need of transplant — all because it was an opportunity to bring others along on this journey. That kind of sacrifice showcases a sense of community here that is very different from anything I have ever experienced in any of the places where I have previously worked. It’s one thing to give in honor of your loved one; it’s something else to say, ‘I want to do more.’” 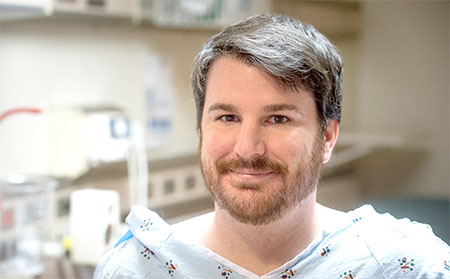 Don HeatherlyUAB student is donor No. 49

For the 29-year-old Heatherly, it did not matter to him if he was involved in the chain specifically. The former Air Force officer and just-graduated UAB criminal justice major in the College of Arts and Sciences says his only goal was to give to someone in need.

“My dad died when I was 18 from a drug overdose, and I’ve been around drugs and seen the damage they can do to people my whole life,” said Heatherly, who interned with the U.S. Marshals and the Drug Enforcement Administration this summer and hopes to work for the DEA in the future. “I’ve always wanted to be out there and part of the solution to problems. Kidney disease is a problem, and donating a kidney seemed like a pretty low sacrifice that can have a huge impact. I hope that more people will see the impact living-kidney donation will have and consider doing it — especially people around my age. If you’re healthy, it can have a great impact on others.”

The 55-year-old Henderson has already lived a year longer than her mother did. And her grandmother lived only into her 40s after succumbing to the disease.

“When my grandmother died, they were just figuring out what polycystic kidney disease was,” Henderson said. “She was being treated for heart disease more so than kidney disease. It’s amazing how far medicine has come to allow me to be here to have an opportunity to live a longer life and hopefully feel good again.”

In a paired transplant chain, a donation like Kok’s can set off a series of transplants in which family or friends of recipients give a kidney to another person in need, or essentially paying donations forward on behalf of a loved one.

Joy Dean, living donor No. 51 of Chesapeake, Virginia — who gave on behalf of her brother-in-law, recipient No. 50 Jerry Phillips — says this chain is saving his life.

“Jerry has been through a lot these last couple of years, and watching his health decline has been hard for all of us,” Dean said. “This chain is just fantastic. It’s very important, and it has a special place in my heart.”

Because deceased donors cannot meet the need for organs, transplant centers like UAB, organ procurement organizations and patients increasingly have explored the potential of living donation. 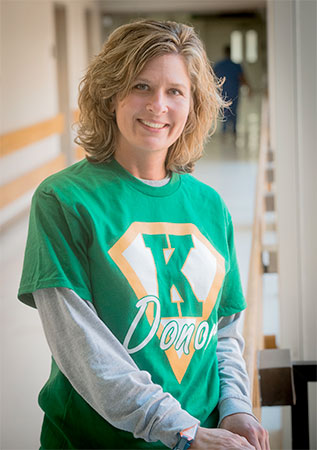 Janaka WestOften, those donations come from relatives or friends. But if compatibility is a problem, the would-be recipient may consider participating in an exchange, in which he or she gets an organ from someone in the chain, and a relative or friend, in turn, agrees to donate a kidney to another participant.

Living-donor kidney transplantation is not rare, but many programs require a completely compatible match. Consequently, many of the transplants UAB surgeons perform, including several in this chain, would not have occurred at other centers. UAB’s program offers patients pre-treatment to overcome blood group and/or HLA barriers to compatibility. Paired donations also improve compatibility and make the transplants less challenging. UAB’s program of combining desensitization with paired donation is unique in the Southeast, and its partnership with Children’s of Alabama makes it the only program in the Deep South to offer living-kidney paired donation to recipients younger than 18; three pediatric patients have been transplanted as part of the chain so far.

“From the beginning of the evaluation process, through to the transplant, after-care and beyond, the hard work and dedication of our staff are an instrumental part of the success of the incompatible-kidney transplant program,” Locke said. “Their devotion, along with the perseverance of the transplant recipients, donors and their families, is what has made this chain possible.”

The chain will not end with Phillips; more transplants are planned this fall.