A simple blood test may help physicians track the progression of rheumatoid arthritis disease activity, say researchers at the University of Alabama at Birmingham. In a paper published online on June 26, 2012, in Arthritis Care and Research, the UAB-led international research team says that a blood test measuring 12 biomarkers for RA is a valid and potentially useful tool in managing the disease. 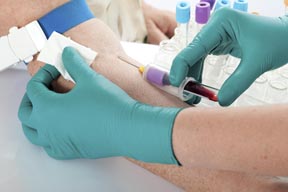 “Previously, the disease activity of RA was assessed through clinical observation by a physician, noting the number of tender and swollen joints and assessing pain and functional abilities,” said Jeffrey Curtis, M.D., associate professor in the Division of Clinical Immunology and Rheumatology and lead author of the study.

“This blood test measures the underlying amount of RA activity within the joints using sophisticated biochemical means intended to reflect the underlying pathophysiology of the disease. A highly reproducible, easily standardized blood test that measures multiple biologic pathways to augment a physician’s and patient’s clinical assessment has not been previously available to physicians.”

Curtis says the test emphasizes the activity of underlying biological pathways rather than external signs and symptoms and should therefore provide information that is different from, and complementary to, clinical assessment. He suggests the test may also help assess treatment response in patients. The test could show in just a few weeks whether a particular therapy is effective, rather than within three to four months as in current practice.

The blood test, called Vectra DA, is a multi-biomarker disease activity, or MBDA, test, developed by Crescendo Bioscience® of South San Francisco. It is basically a measure of inflammation, looking for the presence of 12 cytokines, which are biomarkers, or biological red flags that can indicate the presence of disease.

Curtis says previous studies had selected the 12 biomarkers used in the MBDA from a list of 396 candidates and determined an algorithm that weighted the significance of each biomarker and produced a composite score. The new MBDA score correlated significantly with the DAS28-CRP score, a commonly-used composite metric used in clinical trials of RA treatments that assesses swollen joints, tender joints and the presence of a protein associated with inflammation.

“The MBDA score is a complementary tool that could provide physicians with an objective, consistent and biologically rich measure of RA disease activity,” said Curtis.

Researchers examined 512 patients drawn from three registries of patients with RA. Patients were diverse in terms of geographic location and disease characteristics.

Curtis reports that he receives research support from the National Institutes of Health, the Agency for Healthcare Research and Quality and various pharmaceutical companies. He has also served as a consultant for Crescendo Bioscience.