Think having sex or going to gym class drives weight loss, or that breastfeeding protects a child from obesity? In fact, these are among seven popular obesity myths, according to an article published today in the New England Journal of Medicine (NEJM). Such inaccurate, widespread beliefs, the authors argue, are leading to poor policy decisions, inaccurate public health recommendations and wasted resources.

An international team of researchers led by David Allison, Ph.D., associate dean for science in the School of Public Health at the University of Alabama at Birmingham (UAB), analyzed articles published in the scientific and popular press to separate myths from evidence-supported facts. The authors defined myths as beliefs about obesity, many of which are fervently held despite evidence to the contrary.

“False and scientifically unsupported beliefs about obesity are pervasive,” said Allison, leader of the research team. “As health professionals, we should hold ourselves to high standards so that public health statements are based on rigorous science. In instances where the science doesn’t exist, we should conduct rigorous studies to find the answers.”

Here are the seven myths, explained with implications for public health, policy and clinical recommendations in the NEJM article: 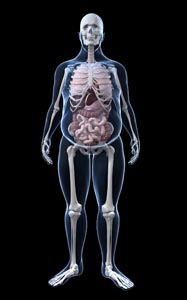 Myth 1: Small, sustained changes in how many calories we take in or burn will accumulate to produce large weight changes over the long term.

Fact: Some data suggest that people do better with more ambitious goals.

Fact: Among those who seek weight-loss treatment, evidence suggests that assessing readiness neither predicts weight loss nor helps to make it happen.

Fact: Physical education, as typically provided, does not appear to counter obesity.

Fact: Breastfeeding has many benefits for mother and child, but the data do not show that it protects against obesity.

Fact: It may be closer to one-twentieth of that on average, and not much more than sitting on the couch.

The authors also defined six “presumptions” — beliefs held to be true even though more studies are needed before conclusions can be drawn. For instance, some advocates have presented as fact the idea that regularly eating versus skipping breakfast contributes to weight loss, but the few studies that have been done have found no effect. The same goes for the idea that eating vegetables by itself brings about weight loss, or that snacking packs on the pounds. According to Allison and colleagues, these hypotheses have not been shown to be true, and some data suggest they may be false.

The researchers also identified nine research-proven weight-loss facts. For example, weight-loss programs for overweight children that involve parents and the child’s home achieve better results than programs that take place solely in schools or other settings. Also, many studies show that while genetic factors play a large role in obesity, “heritability is not destiny.” Realistic changes to lifestyle and environment can, on average, bring about as much weight loss as treatment with the most effective weight-loss drugs on the market.

Though difficult for many to sustain over the long term, eating sufficiently fewer calories effectively reduces weight. Exercise is useful, but only when frequent and intense enough to use up more energy than taken in, and to “a non-trivial degree.” This is only true, moreover, if one does not compensate for that exercise by increasing food intake or decreasing movement at other times.

Although the scientific community agrees that the randomized, controlled trial provides the strongest evidence that one thing causes another, the obesity epidemic has prompted officials to take action before all the facts are in, or when a long-term randomized trial was neither practical nor ethical. Allison and his colleagues argue, however, that randomized trials are possible even in scenarios where they were once thought to be impractical. This 2011 NEJM study of the relationships between neighborhood environment and obesity serves as an example, and it underscores the opportunity for wider use of more rigorous studies to test hypothesized risk factors, treatments or prevention strategies.

Allison said the widespread acceptance of obesity myths and presumptions raises the larger question of why we so often believe things that are not so. The authors identified several factors that seem to contribute to this phenomenon. One is what psychologists call the “mere exposure effect” — repeating an idea often enough makes people more likely to believe it. Another factor is that people may like certain ideas so much that they hesitate to let them go despite evidence to the contrary. Then there is the phenomenon of “confirmation bias,” where we tend to systematically seek out only sources of information that confirm our opinions.

“Fortunately, the scientific method and logical thinking are there to detect erroneous statements, counter bias and increase knowledge,” said Allison. “We believe scientists need to seek answers to questions using the strongest experimental designs. As a scientific community, we need to be honest with the public about what we know and don’t know as we evaluate proposed strategies for weight loss or obesity prevention.”

“From social media outlets like Facebook, to mainstream television news to dietetics and nutrition textbooks, these myths are perpetuated, irrespective of the scientific evidence,” said Krista Casazza, Ph.D., the NEJM paper’s first author and an assistant professor in the Department of Nutrition Sciences, part of the UAB School of Health Professions. “As scientists, we have the responsibility to present the evidence as it exists without inflating ideas and contributing to popular misconceptions. As a registered dietitian, I feel that providing evidence-based statements about weight loss is essential.”