by Jeff Hansen
Patients with such mutations potentially need increased disease surveillance and show a high predisposition to develop malignancies. 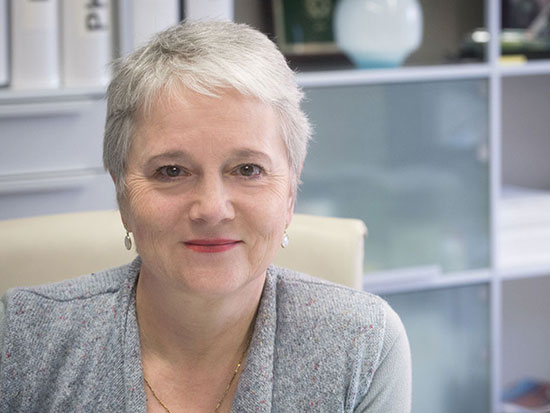 Ludwine Messiaen, Ph.D.Research led by Ludwine Messiaen, Ph.D., professor of genetics at the University of Alabama at Birmingham, shows that missense mutations in a cluster of just five codons in the NF1 gene are an important risk factor for severe symptoms of the genetic disorder neurofibromatosis type 1.

Such information is vital to help guide clinical management and genetic counseling in this complex condition that can be caused by more than 3,000 different mutations found in every part of this large NF1 gene. The study shows a potential need for increased disease surveillance of patients with missense mutations in that cluster — specifically, codons 844 to 848.

Individuals with such mutations, the researchers found, have a high incidence of benign tumors of peripheral nerves or pressure on the spinal cord, tumors of the optic nerve, and skeletal abnormalities. They also have a high predisposition to develop malignancies, compared with the general neurofibromatosis population.

A missense mutation is a change in one nucleotide in DNA that results in a codon for a different amino acid in the protein made by the gene. The protein encoded by NF1 is a string of 2,818 amino acids that folds into the protein shape. Although the NF1 gene was cloned in 1990, the cellular functions performed by the huge, multi-domain protein encoded by the gene, and called neurofibromin, are still incompletely understood. As such, the specific function of the NF1 codons 844-848 remains so far unknown.

This new study is just the fourth association between specific mutations and specific symptoms that have been discovered for neurofibromatosis type 1. Such an association is known as a genotype-phenotype correlation.

Finding these correlations is important because whether patients will have mild or severe disease cannot — in most cases — be predicted when the neurofibromatosis type 1 first appears, often only with café-au-lait skin markings in infants. As the patients grow, they show a broad clinical variability, especially beginning at puberty, when many develop benign skin tumors called neurofibromas that erupt as bumps across the body, both on the skin and internally.

Patients vary widely in their symptoms, which can include freckles in skin folds of the body, benign nodules in the iris of the eyes, tumors along the optic nerve, heart defects, bone anomalies, developmental delay, intellectual disability and learning problems.

“It is important for people to know what may happen,” Messiaen said. “When a child is born with neurofibromatosis type 1, café-au-lait spots appear early in life. But other problems, more specifically the development of skin neurofibromas, typically appear around puberty. If a genotype-phenotype correlation exists for a particular mutation, it will help these families have some perspective of what the future will bring, and it will help families cope with the disease.”

To look for correlations, Messiaen and her team collect detailed clinical information on all symptoms found in each of the neurofibromatosis individuals who had their mutation identified through clinical testing at the UAB Medical Genomics Laboratory. Data are compared to large clinical cohorts previously reported in the literature, as well as to the internal Medical Genomics Laboratory dataset on more than 8,100 unrelated mutation-positive individuals.

The initial characterization of 78 individuals in the Medical Genomics Laboratory cohort with mutations affecting the amino acids 844-848 led to the identification of a genotype correlation and the study was further expanded to include another 84 individuals from collaborating centers. This study, published in the American Journal of Human Genetics, involved 75 researchers and clinicians from 46 hospitals and universities in the United States, Belgium, Italy, Spain, the Netherlands, the United Kingdom, Australia, Brazil, Canada, Israel and Singapore. The study included 129 unrelated people who were the first in their family with the disorder, called probands, and 33 affected relatives.

Neurofibromatosis type 1 is a common genetic disorder with highly variable symptoms, and it occurs in one out of every 2,000 to 3,000 births. The UAB Medical Genomics Laboratory has collected DNA and identified a pathogenic mutation on the more than 8,100 unrelated neurofibromatosis type 1 patients. These include more than 3,000 different mutations, and the mutational spectrum involves microdeletions, deletions or duplications of one or more exons, frameshift and nonsense mutations, and splice or missense mutations.

The missense mutations affecting codons 844-848 in the NF1 gene are found in about 0.8 percent of the mutation-positive probands in the UAB MGL cohort. Although only four groups of recurrent mutations with clear genotype-phenotype correlations have so far been reported, each of them affecting only a small percentage of NF1-affected individuals, they together affect between 5 and 10 percent of the neurofibromatosis type 1 population. While this is already a significant fraction of patients, Messiaen said the “surface has only been scratched.”

While the present study suggests a potential need for increased disease surveillance in individuals with missense mutations affecting amino acids 844-848, it also may herald a potential for genotype-driven personalized medicine. A renewed interest in genotype-phenotype correlations is needed to achieve a timely unfolding of additional correlations, and this will require close collaboration between NF1 clinicians and molecular geneticists.

Korf is the Wayne H. and Sara Crews Finley Chair of Medical Genetics, the UAB Chief Genomics officer, and professor and chair of the UAB Department of Genetics.Support came from the Children’s Tumor Foundation, the Isaac and Sadie Fuchs Genotype-Phenotype Study, and internal funds from the UAB Medical Genomics Laboratory.