As a young nurse floating among assignments at Children’s Hospital of Orange County in Southern California in the mid 1980s, University of Alabama at Birmingham (UAB) School of Nursing Associate Professor Wendy Landier, PhD, RN, often found herself working the pediatric oncology unit when others wouldn’t.

The more Landier worked there and saw the interactions among the nurses, their young patients and the families, the more she grew to love it.

“What drew me to it were the relationships I saw the nurses have with these families,” Landier said. “I thought it was just great. I also thought I’d really love to work in a specialty where I could know and impact families over time like they were.” 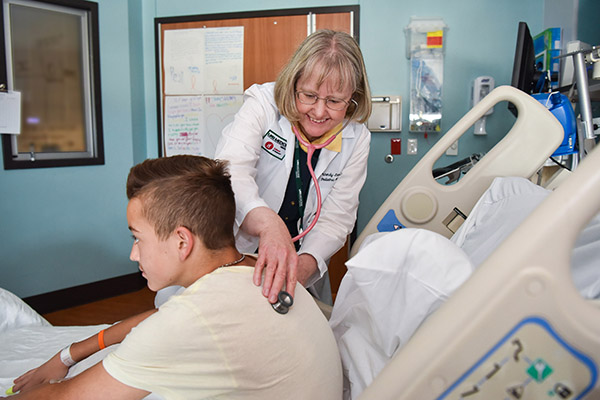 Dr. Wendy Landier examines a teenage cancer patient as part of her work with the Institute for Cancer Outcomes and Survivorship at Children's of Alabama. There she cared for children with cancer of all ages who touched her heart, but one she remembers in particular after all these years was a 3-year-old girl who frequently received spinal taps as part of her chemotherapy treatment for leukemia.

One morning, the little girl’s blood counts were too low to allow the procedure and her mother was told it would have to be rescheduled for a few days later. When the mother told the child, she reacted in a most unusual way.

“She started crying and saying, ‘I want my spinal tap,’” Landier said. “It turns out she really looked forward to her procedures because she liked seeing her doctors and nurses and she liked the way the medicines made her sleepy.”

The child also looked forward to waking up and playing with a toy from a nearby toy room that one of the nurses would always put on her bed.

“She had no idea what a spinal tap was,” Landier said. “She had no recollection of the actual procedure and no pain associated with them. She just knew that was the most fun thing she was going to do that day, and we were taking it away from her so she was upset.

“That was the ultimate understanding for me that what you do and how you do it as a nurse can really make a difference. We had focused on making sure that her procedures were as painless as possible, and as a result she actually looked forward to them.”

The young girl is now in college and doing well, and Landier is a leader nationally in pediatric oncology nursing, including serving as chair of the Nursing Discipline of the Children’s Oncology Group, a consortium of 220 institutions worldwide that work together to improve outcomes for childhood cancer patients and their families by conducting clinical trials.

In that role since 2011, Landier has set the research agenda for the Nursing Discipline and directed the education provided for the organization’s more than 2,500 nurses. She also oversees the important task of appointing nurses to all the group’s clinical trials committees.

“It is a great opportunity because it allows us to shape what is being done in pediatric oncology nursing, and we want to understand how nurses contribute to improving the outcomes of clinical trials,” Landier said. “For example, if parents are better able to understand how to care for their child and to manage symptoms during the cancer experience – because the nurses did a great job of teaching these parents – this may help to avoid treatment delays, which we know can potentially influence outcomes. These are just some of the areas in which nurses can really make a difference.”

Landier was appointed to the UAB School of Nursing Doctor of Philosophy in Nursing (PhD) program faculty in January 2014. At the same time she joined Children’s of Alabama as a member of the Institute for Cancer Outcomes and Survivorship. The School’s PhD program is the only one in the state of Alabama.

In her faculty role, she passes along her experience and knowledge to the next generation of pediatric oncology nurse leaders as they prepare to continue this important work in the future.

“The only way to carry this on is to educate the next generation, and being on faculty in the UAB School of Nursing gives me that opportunity,” Landier said. “It is a wonderful thing to be a member of the PhD faculty here in the School and work with nurses who want to be future leaders in pediatric oncology and touch their lives in a special way.”

“Dr. Landier is such an accomplished researcher and teacher,” Heaton said. “She is renowned nationally and internationally for her focus on pediatric oncology nursing and her commitment to pediatric clinical trials.

“When she joined the School it allowed us to focus on areas, particularly pediatric oncology, that we had not previously been able to. The opportunity for our students to be mentored by someone of Dr. Landier’s caliber provides them an incredible foundation for the future.”

Landier is proud of her efforts to advance pediatric oncology nursing. She is proud of the impact nurses are having on the Children’s Oncology Group, where they are sitting on every committee, speaking up and influencing how its studies are organized and conducted. Most importantly, she is proud of the great strides that have been made in pediatric cancer treatment as a whole.

In the 1950s, a diagnosis of childhood cancer was almost certainly a death sentence. Today, more than 80 percent of children diagnosed with cancer will become long-term survivors.

“We have seen a huge difference in the past 60 or so years,” Landier said. “All we have learned about how to get better and better at treating children with cancer has come through clinical trials, and there have been nurses involved with the Children’s Oncology Group and the clinical trial groups that came before it from the beginning. It is a thrill to be part of that.”

Landier has shared the story of the young girl and the spinal tap with many of her students, particularly those she has taught in clinical settings. She believes it helps them understand how nursing has changed over the years and illustrates that what they will do as nurses really will make a difference. Above all else, there is one thing she hopes all her students take from it and try to always put into practice as pediatric oncology nurses.

Landier said, "In everything we do, we should think about how we can take the pain away so that they leave smiling instead of crying."