Bail, 20 others recognized at 2017 Honors Convocation

University of Alabama at Birmingham (UAB) School of Nursing Doctor of Philosophy in Nursing (PhD) student Jennifer Bail, BSN, RN, has been named the School's first recipient of the University’s Samuel B. Barker Award for Excellence in Graduate Studies.

Given since 1995, the award is named for UAB's first graduate dean Dr. Samuel Booth Barker and recognizes the outstanding accomplishments of one student at the doctoral level and one at the master's level who will graduate in the current calendar year. The winners are chosen by the dean of the UAB Graduate School from among a group of students nominated by the graduate program directors across campus.

Bail received her award at the 2017 UAB Honors Convocation held at the Alys Stephens Center Thursday, March 30. In addition, she was also named the School’s Outstanding PhD in Nursing Student at the same event. Bail is one of 21 School of Nursing students who received awards at the annual UAB Honors Convocation.

Bail also believes the award is a tangible sign that the School’s PhD program curriculum, which underwent a major revamp from 2012 to 2014, is highly effective.

“I am in the first cohort that entered under the revised curriculum and I think not only my success but the success of our entire cohort is proof of the excellence that exists here,” Bail said. “Every course has a purpose and everything you learn builds on something else. The way the curriculum has been revised is so structured and focused that everything you need to be successful is provided.”

Bail has seen a number of achievements throughout her time as a full-time student in the School, which she also believes has been a tremendous benefit. Some of her milestones include:


“Jennifer was a remarkable candidate for this prestigious award because she truly embodies the highest level of student achievement at UAB,” said Associate Dean for Research and Professor Karen Meneses, PhD, RN, FAAN, who is Bail’s mentor. “With her research focus on improving cognitive impairment among breast cancer survivors, she has made great strides in moving the science forward. Jennifer has the passion, dedication and capability to become an independent researcher and make many more significant contributions to this understudied research area.”

Bail expressed her appreciation to Meneses for the opportunity pursue her PhD at the UAB School of Nursing and for guidance throughout her time here. She also thanked the faculty, her fellow cohort members and her husband, Sumanth Bail, for all their help in making her dream of becoming a doctorally-prepared nurse and researcher come true.

“I did not receive this award by myself,” Bail said. “I have many people to thank starting with Dr. Meneses. The faculty and staff are amazing and my cohort -- the Sapsuckers -- have been absolutely amazing as well. Then there is my husband, who has been my No. 1 supporter. He has been there with me and done whatever it took to make this happen for me, and I couldn’t have done it without him.”

Now that she is the School’s first Barker Award recipient, she is optimistic she is the first of many more to come.

“I hope to see another representative from the UAB School of Nursing receive it next year and for many more years after that,” Bail said. “My receiving this award brings awareness of where we are and where we have come from in the nursing profession. People’s perception of nursing and respect for the profession really are changing, and I truly believe that is reflected in someone from the School being selected for this award.”

To see more scenes from the 2017 Honors Convocation, click here. 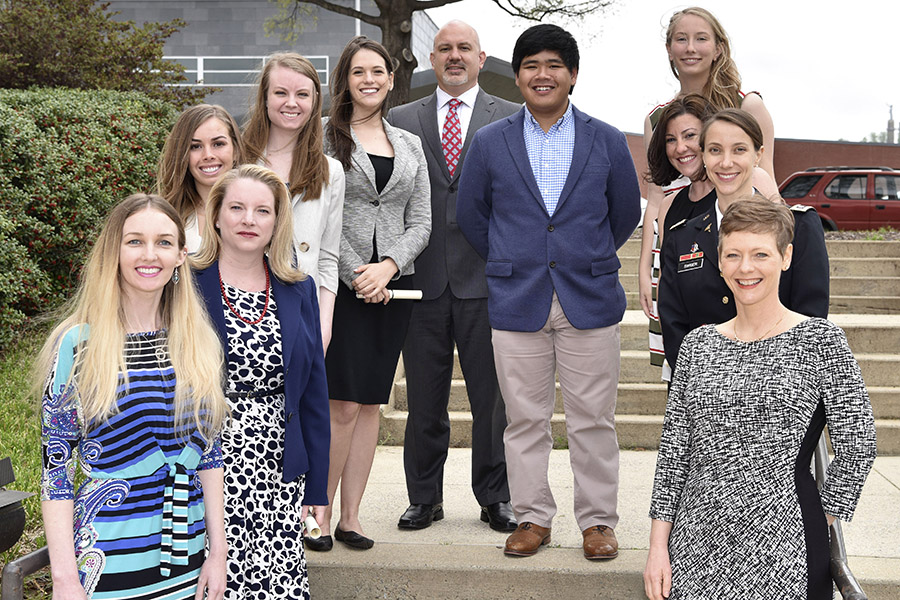