Ticks talk and other mysteries revealed in this biology class 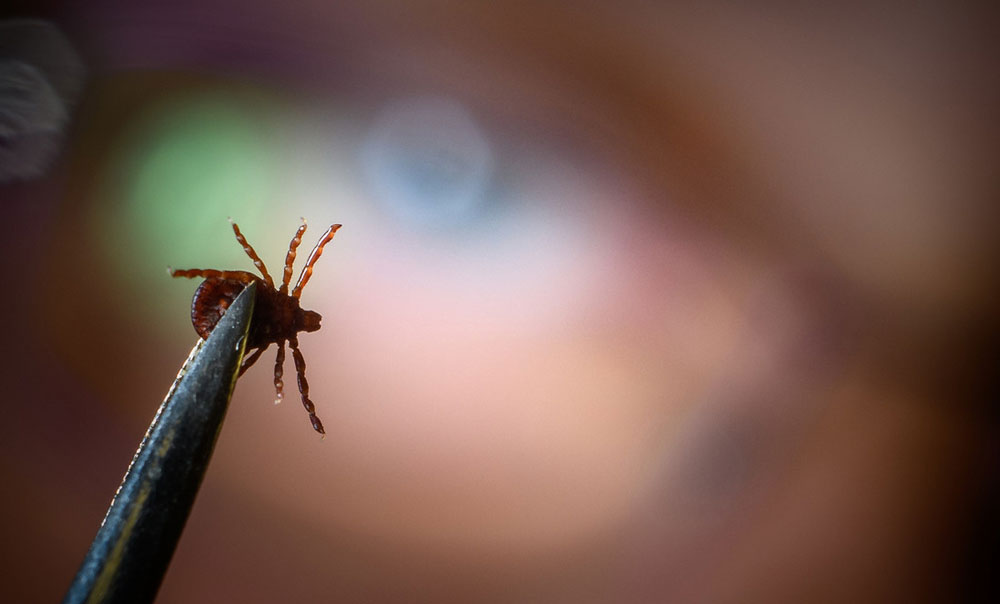 Alabama is home to four species of ticks: the American Dog tick, Deer tick (also known as the Black-legged tick), Lone Star tick and Gulf Coast tick. You may run into any one of them in Heather Patterson's Tick Explorations course.

Heather Patterson, Ph.D., instructional lab manager for the UAB Department of Biology, may have as much first-hand experience in tick-collecting as anyone in the state, but don’t let that fool you. “I don’t like ticks, no,” she said.

She holds particular dislike for the Lone Star tick, which is “a really aggressive species,” Patterson said. “If they get on the collecting cloth near my hand, they immediately start running for my skin.” This will happen when you spend your weekends dragging cloths along tick-laden trails.

But when you teach a course called Tick Explorations, a gentler family — such as clams, Patterson’s specialty — just won’t do. 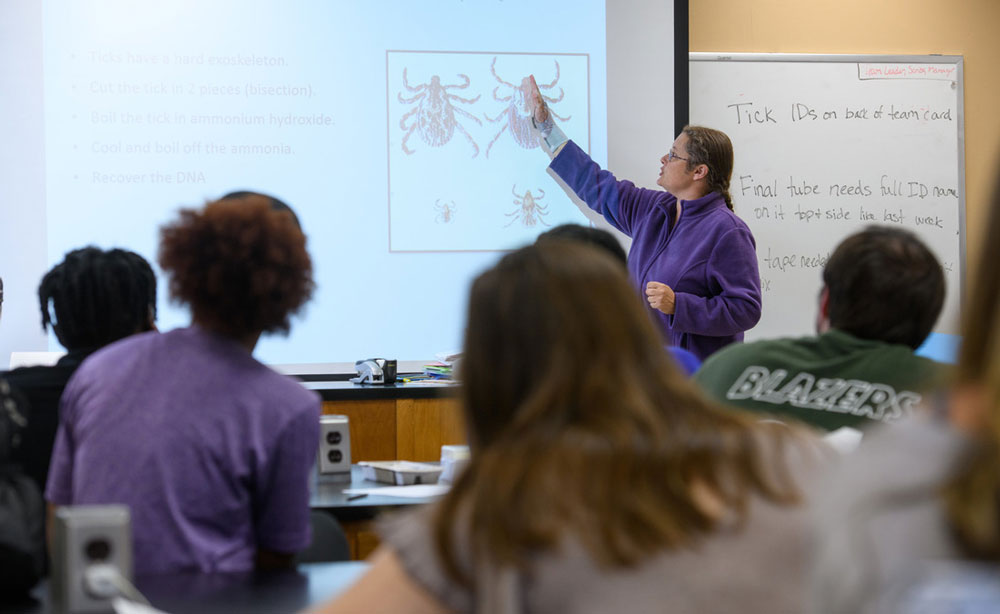 Reality bites: Tick attacks are a fact of life for Heather Patterson, who collects various species weekly for her popular Tick Explorations class, an introductory biology class for non-majors.

The first thing to know about ticks is that each species has a distinctive pattern on its back that you can see clearly under a microscope. Students in Patterson’s introductory biology course, BY102, start there. 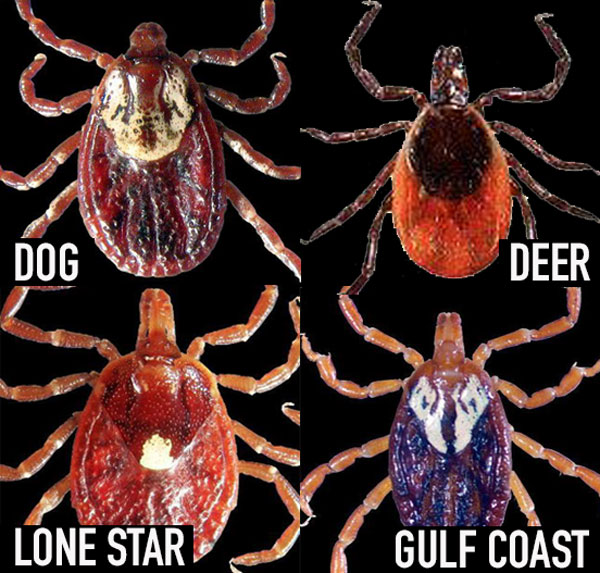 The fearsome four — species of ticks found in Alabama.

Before the semester is over, Patterson's students will have learned to identify the top three tick species (the Gulf Coast tick theoretically can be found in the Birmingham area, but Patterson has never seen one). They also will have learned to analyze tick DNA, create a phylogenetic tree of the specimens’ relationships to each other and check whether any of the specimens are carrying Rickettsia, the bacteria responsible for Rocky Mountain spotted fever.

Tick DNA on the cheap

It costs roughly $4 to get a tick’s DNA sequenced, if you buy in bulk, as Patterson does. For that price you also get genetic fragments from any tick-borne pathogens as well. The ticks are free. But that doesn’t mean they don’t cost anything.

Patterson gives up part of her weekend, most weeks, to collect samples at Birmingham’s Red Mountain and Ruffner Mountain parks. (She collects at Oak Mountain State Park, south of town, less frequently.) Collecting ticks isn’t hard. Patterson drags a cloth along the trailside foliage. Every so often, she turns over the cloth and drops any ticks she’s collected into a tube containing 70 percent ethanol solution. Her son, Patterson said, “gets roped into it” as well. “He used to think it was exciting, but now he’s so over it.”

These trips, Patterson makes clear, are in the name of science and education, not personal enjoyment. She shudders as she describes certain hikes. “I’ve had them all over me,” she said. “Once I looked down at my knuckle and saw a freckle. I thought, ‘I don’t remember that being there.’ And sure enough, it was a nymph — a baby tick.”

See Patterson in action in this video. 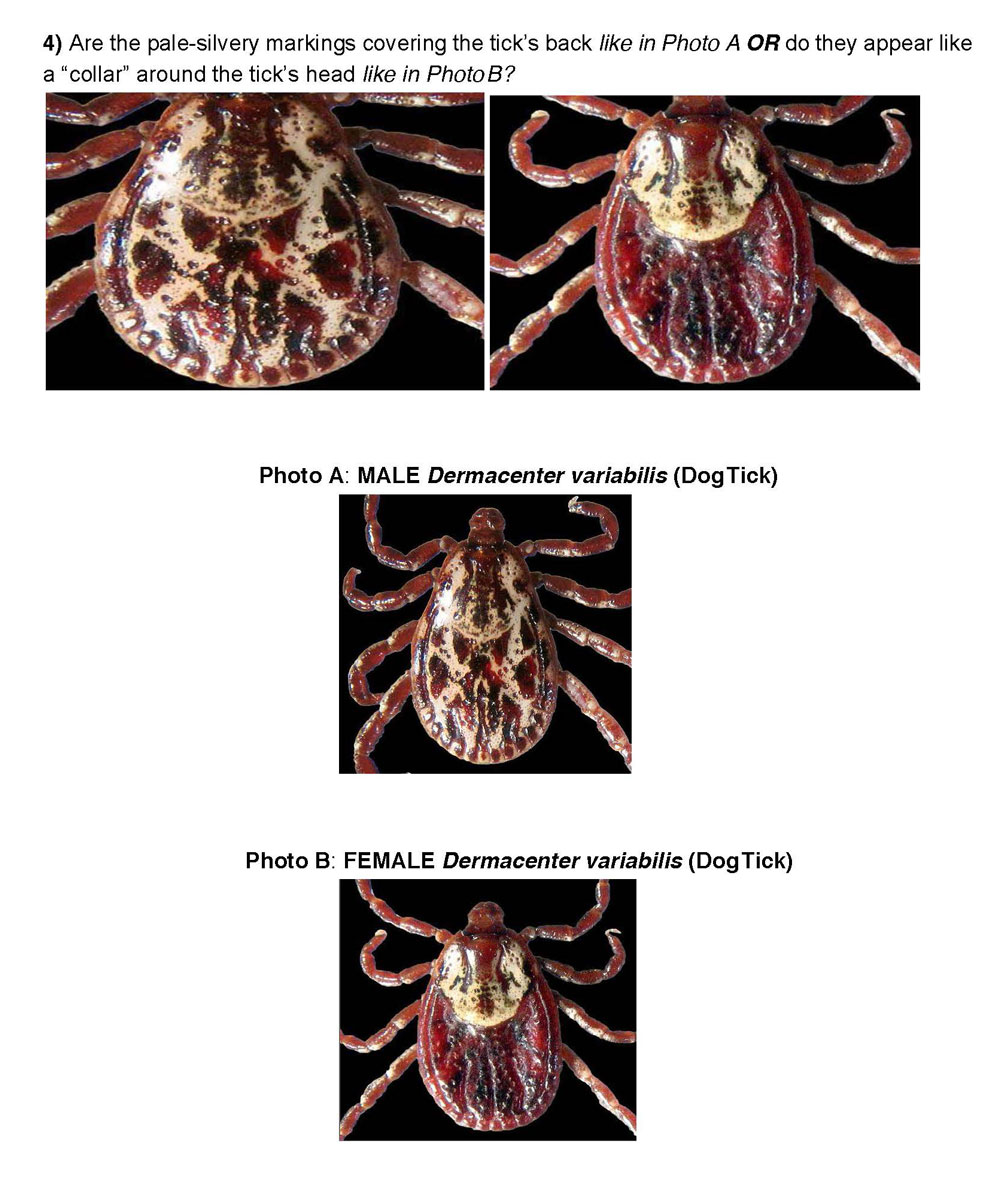 A page of the taxonomic key that students use to identify ticks that Patterson has collected at Birmingham-area parks.

The course may be called Tick Explorations, but some of her students don’t want to take that too far. “They don’t like the first lab the most, because someone has to actually touch the tick,” Patterson said. “They’re wearing gloves and all that and the tick is dead, but that doesn’t make a difference to some of them.”

Patterson’s class is a rarity — a course-based undergraduate research experience (CURE) targeted at non-majors. It was piloted in spring 2016 by Denise Monti, Ph.D., an assistant professor in the biology department, who has taught a CURE on phage genomics for several years. (Phages are viruses that attack bacteria.)

Typical CUREs are targeted to majors in physical sciences. Most of the 100 or so students in her five BY102 sections this spring were majoring in business or education, Patterson said, “and they’re all nervous about science.” BY102 used to feature “cookbook” labs “where there is an expected outcome,” she said. “We wondered, would students who aren’t necessarily planning to be scientists understand and get more out of a course if they were actually doing real science, collecting real data? And we’ve had really positive feedback.” In fall 2019, seven sections of Tick Explorations will be offered, the most ever. 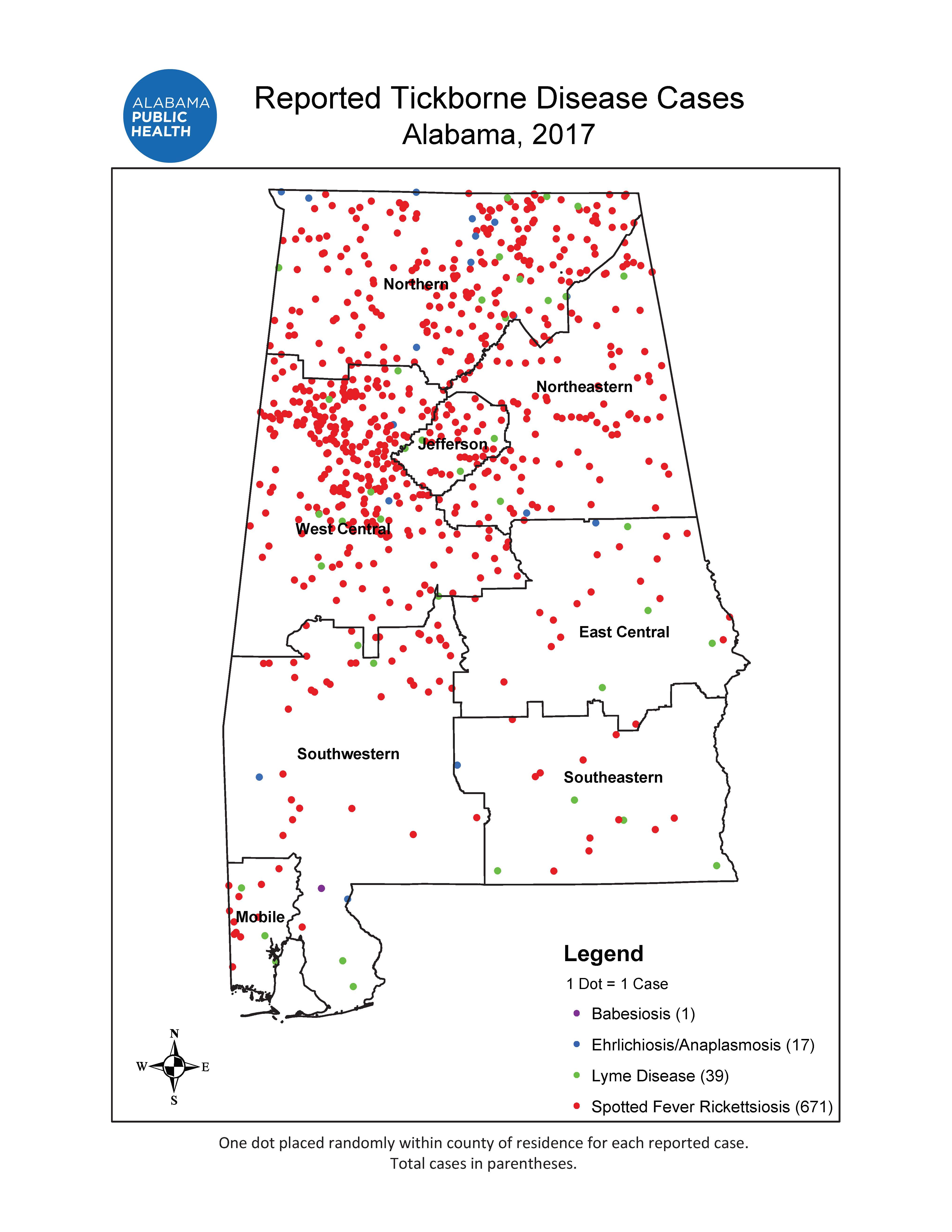 The CURE format, Patterson said, “is designed to give students real, meaningful hands-on experience to discover things that even the professor might not know.”

Or things that nobody really knows. Such as: What’s the distribution of tick species in Alabama, and what kind of diseases are they carrying? In 2018, Patterson was part of the first class of UAB’s Faculty Fellows in Undergraduate Research program, which is designed to accelerate work on innovative curricular approaches. That support helped her expand and systematize her tick collection routine. She started recording field data, including air temperature, relative humidity and collection time. “I’ve been trying to make it be as much like real science as possible,” Patterson said.

She sees definite patterns. “At Ruffner Mountain I’ve only gotten Dog ticks,” she said. “At Red Mountain I get all three species. At Oak Mountain I haven’t done as much, but I mostly collect Lone Star ticks.” This past winter, she continued to collect ticks, “so we have a full year of data at one of the collection sites,” she said. “Interestingly, we have different species of ticks in the winter versus the summer.” 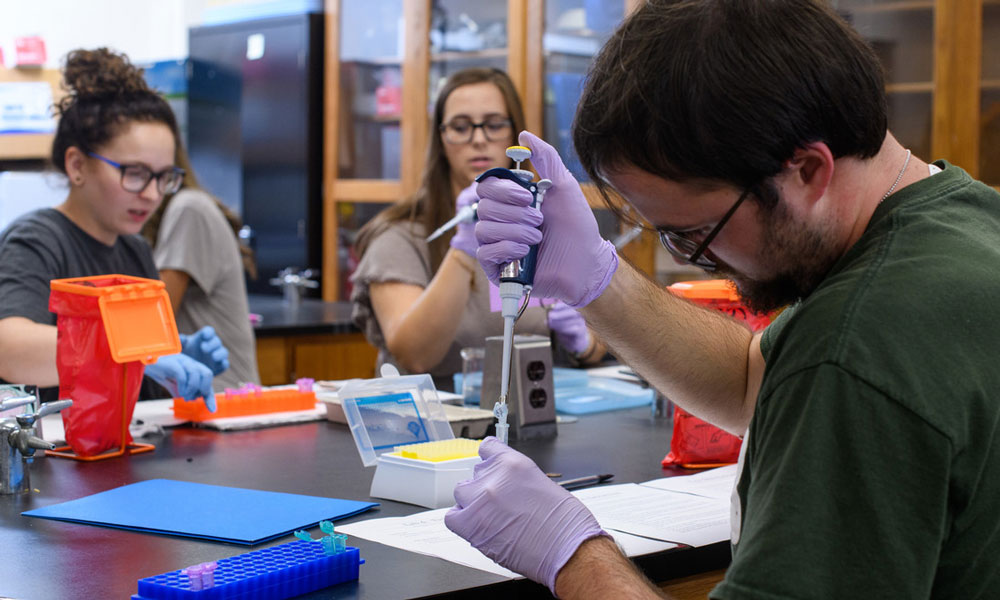 Students in Patterson's intro class are "all nervous about science," she said. "We wondered, would students who aren't necessarily planning to be scientists understand and get more out of a course if they were actually doing real science, collecting real data?"

A hint of Lyme?

Lyme disease is the one everyone fears. It’s only carried by the deer tick, which isn’t very prevalent in Alabama, according to official reports. Still, cases have been rising in the past few years, along with Rocky Mountain spotted fever, ehrlichiosis, anaplasmosis and newer tickborne infections such as STARI (Southern tick-associated rash illness).

Patterson and her students use a free online program called DNA Subway to analyze the genetic sequencing data on their tick samples. They focus on the 12S rRNA gene, which lets them confirm visual IDs and measure the relatedness of different species based on their geographic location.

The sequencing also alerts them to the presence of the Rickettsia bacteria. Now “we’re trying to figure out if we can get a reliable test for Lyme,” Patterson said. “The immunological methods have a lot of false positives. We’re trying to find the best primer sets. I haven’t seen it in my samples, but I also don’t have a positive control. It’s available in other labs, but since 9/11 you can’t send it through the mail.” She is leveraging personal connections to try to get her hands on a control sample. 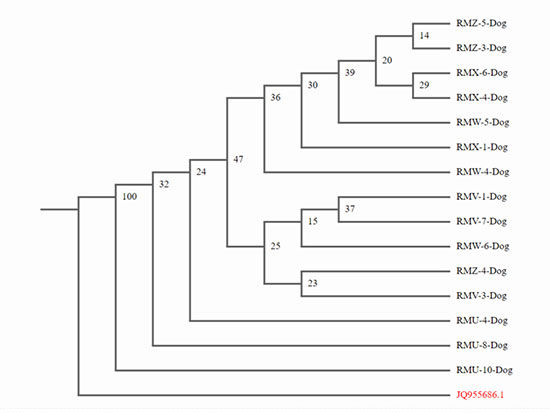 Students create these phylogenetic trees to examine the relatedness of collected tick samples.

So much to learn

There so much that people are finding out about ticks, Patterson added. “There’s good work out of Virginia and North Carolina — but there are very few researchers studying ticks in our state. There’s probably some local adaptation. I swear the deer ticks here are slightly bigger, although I only have weight data. Ours don’t seem as small as they’re supposed to be.”

With two years’ worth of data, including weights, locations, environmental conditions and DNA sequences, Patterson now is completing a paper on her findings; her students will appear in the acknowledgments.

Several have already thanked her for the practical lessons. “I’ve run into two now at stores who tell me, ‘I can ID ticks now when I have one on me.’ I say, ‘I’m glad!’”